One Good Thing and a Few Variations on "Worst"

Here’s a pretty cool piece on Twitter from Ed Driscoll which contains everything you ever wanted to know about Tweeting, and then some:

If you moused over the Ed Driscoll link you probably saw it takes you to a piece Ed wrote called “Twitter: ‘The Worst Person in the World.’” And yeah… that’s a nod to one of Olbermann’s signature shticks, wherein he names a daily “Worst Person” on his “show”… which is nearly always someone like Dubya, Cheney, Newt, Ann Coulter, or any other conservative who happens to pop into his ever-so-short attention span. Being named as “Worst Person” is a Badge Of Honor for conservatives, ya know.
Well, Dear Keith put his foot in it last week, BIG Time, by claiming... on air, in a “Worst Person” segment, no less!... his @countdownMSNBC Twitter account was a false-flag op by none other than Fox News. In the words of : “Epic Fail!” The whole story, if’n ya missed it… is here… complete with Olby video and screenshots of the now-closed @countdownMSNBC Twitter account.
Heh. This couldn’t have happened to a more deserving asshat. Long time readers know I used to beat up on Olby quite often in the way-back… I’ve since discovered I (generally) have better things to do with my time, but this is TOO good to let slide…
―:☺:―
Apropos of “worst”… this weekend was a serious downer for YrHmblScrb. First there was the weather, wherein Ol Man Winter made a curtain-call here on The High Plains of New Mexico on Friday and Saturday… complete with freezing rain, snow, wind, and other undesirable weather thingies. Sunday was a little better in that our temps got back up into the 70s… but there was that howling wind… ever-present at this time of year. Here’s what we looked like last Friday morning: 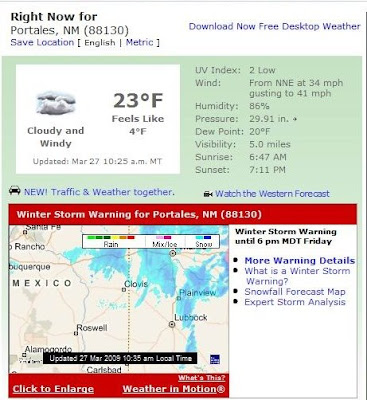 I took that screenshot and went directly back to bed and stayed there until around 1400 hrs. It wasn’t only the weather that drove me to return abed though, Gentle Reader. I’m still not healing as well from the latest Adventures in Modern Dentistry as I think I should be and there’s a distinct possibility I may be nursing an infection of sorts. I’m scheduled to have my stitches removed late this week but I may go in earlier if The Good Doctor is available (he’s on his annual, well-deserved Spring Break at the moment).
So… there’s all that and more. I spent the entire day Sunday down with an absolutely miserable case of gastric distress, of the type where one cannot be more than a few feet from The Little Room at any given point in time. Nothing… not even water… would remain in my gut longer than about six minutes. Pepto-Bismol normally works pretty well for me when I’m so afflicted, but NOT yesterday. Whatever gut-bugs are resident in my frame simply drank The Pink Stuff up and sent it on its way… quickly. This also tells me I may be nursing some sort of infection.
This, too, shall pass.
Committed to the Inter-tubes by Buck on 3/30/2009 12:01:00 AM