I went out to the base yesterday to do the bi-weekly commissary run (and play with ATMs, in my spare time) and noticed a significant amount of activity on the flight line… much more so than in weeks and months past. For the better part of a year now there have been only one or two C-130s on the ramp, rarely more. But yesterday I counted five C-130s on the ramp and one in the pattern, shooting touch ‘n’ goes. One of the cute lil buggers you see below was shooting touch ‘n’ goes, as well. About which: 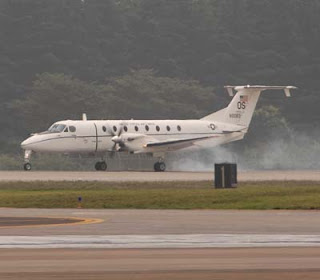 More than Just An Aircraft: The Air Force plans to deploy an expeditionary air support operations group of about 100 airmen to later this year to support its new fleet of MC-12W intelligence-surveillance-reconnaissance aircraft. These airmen, operating out of sites throughout the theater, will analyze, disseminate, and process the full-motion imagery and signals intelligence data collected by the aircraft's sensors. The airmen will help to pass on this information as quickly as possible to the ground troops at the tactical level who need it most. "Heretofore, intelligence was largely centered at high levels," Brig. Gen. Blair E. Hansen, director of ISR capabilities on the Air Staff, told reporters in the Pentagon Jan. 23. He continued: "Now we have the ability to flatten it. We've made it immediately consumable … and this system is one of those systems pumping information into that picture." The first of the MC-12Ws is expected in Southwest Asia in April. The aircraft themselves will be equipped with such tools as the remote operational video enhanced receiver to pass live video streams directly to the airmen on the ground who call in air strikes. (For more, read Project Liberty Heads Downrange)

One normally sees King Airs hanging around municipal airports, the executive sections of our major hub airports, and only rarely at USAF bases. While the Air Force has long flown military equivalents of executive aircraft for VIPs and such, I find it interesting that the service is taking the King Air and fitting it out as an ISR platform… all in the space of about a year from concept to initial operational capability (IOC). From that “Project Liberty Heads Downrange” link above:

The genesis for LPA came last April when the Office of the Secretary of Defense task force sought a quick means to address the seemingly insatiable demand for ISR capability in . Virtually all MQ-1s and MQ-9s deploy to the fight as soon as they arrive from the factory, yet the demand keeps growing.

“That curve is as steep as it can get right now,” said Hansen of the Air Force’s UAV efforts in theater. Currently there are 33 combat air patrols of MQ-1 and MQ-9s flying in .

After weighing concepts, Defense Secretary Robert Gates last July signed an order for the Air Force to proceed with its proscribed (sic) solution: procurement of 37 specially configured C-12 twin-engine aircraft based on the Beechcraft King Air 350. Thus was born “Project Liberty,” named after the World War II effort to quickly press commercial ships into the fight in .

“The concept was, ‘What can we do in an additive fashion that would get extra capability?” said Hansen. The need was simple: FMV and Sigint in a multi-sensor package. And, getting it to the war zone soon.

Now is that cool, or what? There’s precious little in the media about the MC-12 and I have NO idea if there will be a permanent MC-12W presence at Cannon in the future. But it was great seeing that lil guy buzzing around the airplane patch yesterday.

Update, 05/04/2009: Correction to this post published here, along with a photo of an actual MC-12W. The C-12 I saw zooming around in the pattern at Cannon AFB the day I wrote this post was NOT an MC-12... it was a garden-variety C-12 operated by AF Special Operations Command. My apologies.

(Links and photo from the Air Force Association's Daily Report, which is linked in my sidebar.)