Happy Winter Solstice! We entered winter at 1204Z today, and that would be 0504 hrs MST. I was still sound asleep at that time, meaning it was already winter when I awoke. It sure feels like winter, too. To wit: 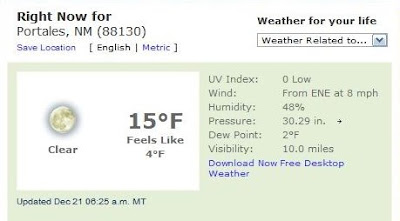 Our high here on The High Plains of will be all of 33 degrees today… if the forecast comes to pass.
But… back to the solstice. I checked the Beeb’s web site this morning to see if there were any photos from the solstice festivities at this year… but alas, no. I did find a slideshow of 11 photos from the 2006 event, though. It seems like our modern-day Druids are less in touch with the firmament than their ancestors. There’s a series of wry little notes at the linked site that say…

Unlike the Summer Solstice.... the Winter Solstice is a bit of a moveable feast..
...which last year saw 60 plus revellers turn up at the stones 24 hours early...
...mistakenly believing that the winter solstice always falls on December 21.
It doesn't... so to avoid any pagan pink faces...
...this is to confirm that will be open for Winter Solstice on , from to .
Heh. Musta been a bit of embarrassment, that.
―:☺:―
Also from Auntie… Let Them Eat Cake Caviar! Quote: 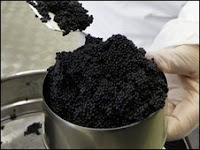 Beluga caviar seized by Italian customs officers is to be distributed to poor people in as a Christmas gift.
About 40kg (88lb) of caviar was confiscated in November after two couriers travelling from were stopped with the hidden cargo.
Newspaper Corriere Della Sera says the caviar had an estimated value of $550,000 (£370,000).
Tests showed the caviar to be edible, so it is to be given to canteens, hospices and shelters for the poor.
Beluga caviar is the most expensive variety of the delicacy.
Countries have tried to crack down on illegal trading of caviar after more than 600 tonnes of it were traded in the EU between 1998 and 2004.
I was shocked at how the price of beluga has gone up. You can’t buy it in the any longer… unless you live in states where it’s directly imported… which, in the case of my google search, consist solely of and . You’ll pay handsomely for the privilege, too: $145.00 per ounce. That’s approximately ten times the price I paid for the caviar I bought in in 1994 (or so) and brought back to the .
Dang.
Committed to the Inter-tubes by Buck on 12/21/2008 07:59:00 AM