It’s that time again. And you’ll probably respond by asking “just what time would that be, Buck?” To which I reply: Valour-IT time… a fundraiser whereby our wounded troops receive voice-activated laptops from Soldiers’ Angels, a hard-working organization that supports our troops and has been doing so since 2003. For the record: Valour-IT is a project of Soldiers Angels, which is an IRS-designated 501(c)(3) non-profit charity. Thus donations to the project may be tax deductible, and eligible for employer matching funds if applicable.

But… more specifically… here’s what Valour-IT does (an excerpt from “About Valour-IT,” at the Soldiers’ Angels web site):
Project Valour-IT
(formerly Voice-Activated Laptops for OUR Injured Troops)
In memory of SFC William V. Ziegenfuss
Every cent raised for Project Valour-IT goes directly to the purchase and shipment of laptops and other technology for severely wounded service members. As of November 2008, Valour-IT has distributed over 2700 laptops to severely wounded Soldiers, Sailors, Airmen and Marines across the country, and is now expanding its mission to include other technology that supports physical and psychological recovery.
Valour-IT accepts donations in any amount to support our mission, but also offers a sponsorship option for laptops. An individual or organization may sponsor a wounded soldier by completely funding the cost of a laptop and continuing to provide that soldier with personal support and encouragement throughout recovery. This has proved to be an excellent project for churches, groups of coworkers or friends, and members of community organizations such Boy Scouts.
Originally Valour-IT provided the voice-controlled software that accompanies the laptops, but now works closely with the Department of Defense Computer/electronic Accommodations Program (CAP): CAP supplies the adaptive software and Valour-IT provides the laptop. In addition, DoD caseworkers serve as Valour-IT’s “eyes and ears” at several medical centers, identifying patients in need of laptops and other technological support for their recovery.
The Valour-IT fundraiser is a good-natured (heh) competition among the uniformed branches to see who can raise the most money for this oh-so-worthy cause. If you’ve been around these parts for a while you know that EIP always signs up for the Air Force team in this annual competition. While we Zoomies have yet to win the competition outright (The Ground-Pounders won last year, narrowly beating out the Jarheads with a last minute surge) we have managed to give a good account of ourselves. Sorta. I’d like to see us turn that around this year… obviously.
But… organizational pride aside… the important thing is to give to Valour-IT, regardless of which branch you support. I’d be right proud and humble if you’d consider donating in favor of Team Air Force. Just click that icon at the very top of my sidebar. The fundraiser runs from now until November 27th… but don’t wait until the last minute! Hit it now, while you’re thinking about it!
Update, 11/17/2008: Mrs. Greyhawk put up a post today that goes a long way towards debunking the “Air Farce” and “Chair Force” memes (among others) our comrades-in-arms from the other services are so fond of invoking when we get into those “Who's Best” arguments discussions. We Zoomies have acquired a reputation over the years, deserved or not, of being something of a pampered crew. Which, of course, stems from the superior Quality of Life Blue Suiters enjoy... which results in a lot of envious (read: disparaging) comments from our less fortunate brethren (sisthren, too). But... be that as it may... let me remind you: the USAF is in the fight in a BIG way. Mrs. G enumerates a lot of the contributions the Air Force makes to The Mission... and I'll add one more: the TAC-P guys, who are functioning members of fire teams “on the ground” (most literally) in Iraq and Afghanistan. They're the guys who call in the precision strikes from the A-10s, F-16s, and B-52s orbiting the battlefields... and often work with the Navy's F/A-18 drivers, as well.

Speaking of F/A-18s... who do you think provides the in-flight refueling those Hornettes require to remain “on station” for longer than 20 minutes at a time? Yep... it's USAF KC-135s and KC-10s. We like to share.

Now that we have that off our chest... have you donated to Valour-IT yet? Ya know where that button is!
Update, 11/28/2008: Well, Thanksgiving has come and gone, barely. The Valour-IT fundraiser is over, and the results are identical to last year's: Army wins, Navy is second, and the Marines edged out (barely) Team Air Force for third. Thank God for the Coast Guard, as they bring up the rear again this year, saving us Blue-Suiters the ignominy of placing last. There's an old military axiom that "quantity has a quality all of its own," and I think that holds true for fundraisers. I'm not making excuses, mind you, but 182 blogs took part in the Valour-IT fundraiser. The Ground-Pounders and the Squids (combined) owned 68% of the participating blogs and, strangely enough, raised roughly 70% of the money. Coincidence? I think not... The actual breakdown of participating blogs was... 82 Army, 43 Navy, the Marines and USAF each with 25, and the Coasties had 7. And here's the final results, as of 0130 hrs Friday morning (as always, click for larger): 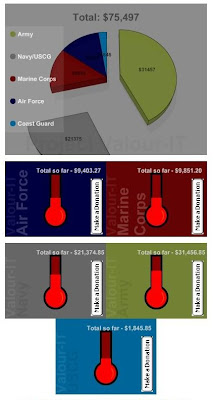 Now that it's all over but the shouting (and there WILL be some shouting, believe me!) let me heap many, many thanks on everyone who contributed. I suppose $75K is better than a poke in the eye with a sharp stick but I wish we could have done better. Ah, well. It's hard times.

Speaking of hard times... I'm wondering what my penance will be...