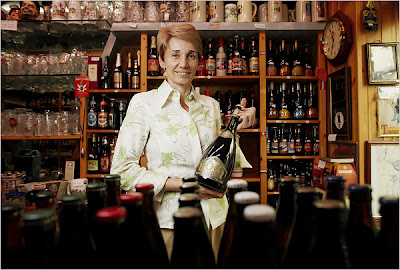 Flavia Nasini is an owner of A Tutta Birra, a shop in that stocks many of 's great craft beers, as well as rare brews from around . (Photo: Dave Yoder for The New York Times)
When you think of and beer in the same space, most people think “.” A few will think “” (including YrHmblScrb), and the cognoscenti immediately think “!” But beer and ? You might think that’s a non-starter, as I did. If so, you need to read “Savoring Italy, One Beer at a Time.” Excerpts:
We celebrated our arrival with a couple of the brewery’s pilsner-style beers, a ubiquitous, often-overlooked style that Birrificio Italiano’s brewmaster, Agostino Arioli, has attempted to redeem with hoppier, more flavorful versions, traveling to Germany to select his own hops.
As we sipped our lagers, commenting on their vibrant bitterness, a jazz band set up on the pub’s small stage, beginning to play just as our appetizers arrived: a plate of poppy-seed toast with rich toma cheese and a sticky, gooey beer jelly, accompanied by a glass of the brewery’s Scires, a wine-like strong ale flavored with local cherries. Our main courses quickly followed: a chunky, inch-and-a-half-thick pork chop, and scottata alla piastra, a plate of paper-thin grilled pork fillets, both of which were marinated in the brewery’s malty Bibock ale, which made an excellent accompaniment. The same flavors showed up in our shared dessert: a panna cotta made extra sweet and slightly bitter with a dose of Bibock, which combined perfectly with the light dusting of chocolate on the pudding’s top.
As I finished the meal, I found myself thinking: If this is what ’s craft beers are like, they can keep the wines.
I keep finding reasons to renew my passport, and this is one of the best I’ve seen lately. Some of the descriptions of the food and drink in this article literally made my mouth water. The article also made me wish I lived in a place with good liquor stores, as well. I’d like to sample a few of the beers named in the article but that’s not even remotely possible here on The High Plains of New Mexico, where Bud, Miller, and Coors rule the roost… such as it is. Well, with the possible exception of the Class VI store out at Cannon Airplane Patch. Thank God for small favors.
―:☺:―
Imitation is the sincerest form of flattery… or however that saying goes. And in the hockey world, the Red Wings are drawing their share of flattery, beginning with the league-leading (at the moment) San Jose Sharks (“New-look Sharks out-Winging their opponents early on in season”). A few excerpts from the linked story:
The reverberations of the 2007 Stanley Cup victory of the Anaheim Ducks, it is fair to say, are still being felt.
The Ducks partially brawled their way to that title, and last season much of the Western Conference added muscle with which to confront .
[…]
The Detroit Red Wings, needless to say, proved there was another way last season, riding skill, speed and Tre Kronor power to an impressive Stanley Cup title. The Wings hardly fought at all, didn't carry an enforcer and roared through the postseason.
That left the San Jose Sharks, to name one team, in a bit of a conundrum.
Follow the Ducks or follow the Wings?
Simply being the Sharks, after all, wouldn't do. That had become synonymous with strong regular seasons -- 418 points in four seasons -- and disappointing playoff pratfalls.
Well, for better or worse, the Sharks chose to imitate the Wings.
In fact, beating the Red Wings 4-2 in on Thursday night boosted the Sharks to 9-2 on the season, the best start in franchise history. It was a game that came on the heels of an impressive win over the Eastern Conference defending champs from , in which Sidney Crosby and Co. were held to just 11 shots by the stingy Sharks defense.
The Wings, it's fair to say, left town thinking they'd just played themselves.
[…]
"Not only are they the Stanley Cup champs," said winger Ryane Clowe. "But we stole their assistant coach."
That, of course, is the most concrete evidence that plotted to copy this season. assistant coach Todd McLellan was hired by the Sharks to replace the fired Ron Wilson, who was canned somewhat reluctantly by Doug Wilson and was immediately snapped up by the Toronto Maple Leafs.
Well, hiring ’s assistant coach certainly goes a long way towards implementing the Wings’ style, doesn’t it? The Sharks have been an impressive regular season team these past few years, yet have consistently failed to advance beyond the second round of the playoffs, come spring. This year might be a different story… and as noted above they’re certainly beginning the season with an impressive showing.

Yeah, it’s early days and a can happen between now and the playoffs. And a lot can happen DURING the playoffs, as well. As Damien Cox says in his closing sentences: “It looks great now. When it comes to the spring, however, it will be a lot tougher to out-Wing the Wings.”
Word.
Committed to the Inter-tubes by Buck on 11/03/2008 08:22:00 AM