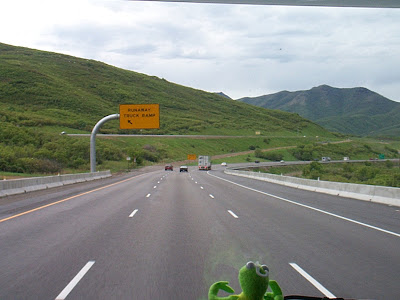 So… three years into this blogging gig and I still get this feeling occasionally: why bother? The feeling only comes to the fore on days when I’m either unmotivated or have nothing to say. Sometimes I chalk it up to a lack of “interesting” items in the news and elsewhere but most of the time it’s simply a failure of imagination… specifically MY imagination. Some people have built huge and successful blogging careers on the joys of shopping at Target (as if that’s all he writes about; note the irony), others have attics chock full of tales of derring-do in high performance jets, and still others have enjoyed success simply by being bat-shit crazy (with liberal dollops of profanity thrown in, just for the fun of it). One would think I could learn by example, even given the fact I've not shopped at Target lately, haven't flown anything... ever, and am in full possession of my sensibilities and can express myself (occasionally) without being profane. But noooo...

It’s not like I haven’t been around the block a few times or that I don’t have a storehouse of bloggable stuff (I do). Well, check my last… while there IS lotsa bloggable stuff in said storehouse, a lot of it (most?) isn’t quite suitable for the tone I’ve established here at EIP, that tone being PG-13. For the most part.

Maybe I need a new blog, written under a pseudonym, where I can discuss the finer points of whoring around and dabbling in proscribed substances in the world’s backwaters. And in some frontwaters, too. Maybe. But then again, those times were long ago, far away, and have largely been either forgotten or diminished by years of domestic tranquility and middle-class normalcy. Such as that was… emphasis on the past tense. But even domestic tranquility seems exciting compared to life as an exile (in Portales!). I suppose we’ll manage to muddle through without the sordid tales, even though I imagine some of you would be pleased… secretly or otherwise… to hear about how I scraped the bottom of the moral barrel in my youth.

Ah, but for the moment? It’s imagination, failure of. This, too, shall pass.