A Masterful Take Down

Mark Steyn posts a (fairly) long, well-researched, and incredibly scathing (not to mention laugh-out-loud funny) rejoinder to one of his unfortunate and severely clue-impaired critics, one John Gordon Miller… ostensibly a Canadian professor of journalism. Mr. Miller, in an open letter to Mr. Steyn, led off with the following (from the “clue-impaired” link, above):

With all due respect, Mark Steyn, I did not accuse you of making up a quote. You clearly accepted someone else’s word for it. But that’s not good journalism. Few journalists I know would take Oriana Fallaci’s word about Islam at face value the way you did, for reasons I will explain.

You uncritically accepted her reference to the “Blue Book,” and went on to have fun with the notion of Mohammed Atta interfering with the livestock instead of suicide bombing. But there is no Blue Book, it’s The Little Green Book. And it wasn’t written by the Ayatollah at all, as you say, but by a source who was apparently at least three times, and three languages, removed.

And thus the gauntlet was thrown. I’ll give you a short quote from Mr. Steyn’s piece, which comes near the end: 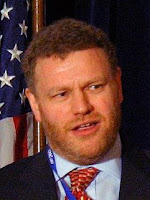 So just to reprise:

Is there a volume by the Ayatollah commonly known as the "Blue Book"? Yes

Does it include rulings on sex with nine-year olds and what to do with a shagged sheep? Yes.

I think Professor Waggy-Finger is doing what they call "projecting". He's accusing me of everything he's been doing himself. I took "somebody else's word for it". Er, no. That would be you, taking the Sock Puppets' word for it on my book review. I didn't check the "primary source". Er, no. That would be you, cavalierly announcing there's no such thing as a "Blue Book". To be more charitable to you than you deserve, you assume that Oriana Fallaci and I so want to think the worst of Islam that we'll fall for any old hooey. Actually not. On the other hand, you so want to think the worst of us blowhard provocateurs that you assume we're as ignorant of Islam as you evidently are.

I’m SO reminded of that ol’ cliché about not engaging in a battle of wits with the unarmed, and Professor Miller is clearly and demonstrably unarmed in this particular case. One would think a journalism professor, of all people, would have the good sense to check out his facts before assailing someone about theirs. But nooo. I’m simply amazed Professor Miller had the gall to take Steyn to task, and pleased as punch that Mr. Steyn took the time to beat the livin’ dogshit out of this pompous ass. Mr. Steyn’s piece is a take-down for the ages.

This lil brouhaha is a sideshow to accompany recent events that transpired in , vis-à-vis Mr. Steyn’s outspoken critiques of militant Islam. For those of you who haven’t been following the 1984-like persecution of Mr. Steyn by the Canadian Human Rights Commission and the British Columbia Human Rights Tribunal, there are summaries here and here.