From the OC Register: “Red Wings Nation is growing in Ducks’ neighborhood” Excerpts: 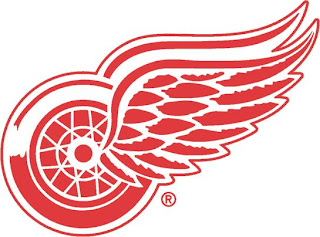 “Duckman” noticed it and made mention of it on the OC Register’s Ducks blog page during Wednesday night’s game against the Detroit Red Wings.
Register columnist Randy Youngman and a few others seated in the high-altitude press box noticed it, too.
When Teemu Selanne sealed his hat trick in Wednesday night’s overtime Ducks victory, the reaction of the 17,174 fans at Honda Center was pathetic.
It took close to 30 seconds before one measly hat went zipping through the air. I didn’t see more than two hats land on the ice.
By night’s end, more octopi had landed on the Honda Center ice than hats. And the Ducks were the winning team!!!
By contrast, it was easy to feel that buzz in the arena that was generated by the Red Wings fans in attendance.
At about , more than an hour before the game started, the cluster of Red Wings fans was already growing in section 209, near the tunnel that leads to the Wings’ locker room.
They all wore their Red Wings’ sweaters. They all shared a common bond. It was a bond that was built on their love and dedication to the Red Wings. And their knowledge of hockey.
Yep… that would be “Red Wings Nation,” about which:
“The Red Wings are ’s Team,” said (Jacqui) White, a native of . “I’ve suffered through horrific seasons, devastating losses and have been lucky enough to see four Stanley Cup Championships.” (Ed: Me, too! Me, too! Since 1985…)
[…]
While the city of is widely known for its burned out buildings and criminal element, the Red Wings Nation West wasn’t created to bash other teams or their fans. This nation isn’t nearly as obnoxious as those who consider themselves residents of Red Sox Nation.
Well, there’s just a lil bit of hyperbole at play in the foregoing. The Wings are hardly “’s Team”… if only because hockey isn’t near the draw (yet) basketball or baseball is… but they just might be “’s Hockey Team.” I could buy that.
Question: Isn’t it strange/interesting that the loyalty and dedication of Wings’ fans gets (a) noticed and (b) merits a rather extensive article in one of SoCal’s major newspapers?
Answer: No. Not really. Hockey fans know, beyond a doubt, that the Wings’ fan base is nationwide… even in sunny . Hockey fans also know that when the Wings are in town…any town… there will be a big contingent of Red Wings fans in the stands. Even casual fans can’t fail to see the distinctive red jerseys sprinkled liberally throughout the enemy arena when the Wings play away games. The only other hockey team with as a loyal a fan base is Les Habitants (arguably… hockey fans are as rabid as they come, no matter where they live)… and those fans generally don’t travel outside of Quebec, unless it’s to Toronto for a game against the Leafs or maybe down to New Yawk or Boston to watch the Habs play the Rangers (Islanders?) or B’s. is close to those two cities, ya know. So the Wings are fairly unique for a hockey team, in the sense that their fan base, while concentrated in Deetroit, is ultimately nationwide.
Coz that’s just the way we are, Gentle Reader.
(OK… you hadda know this was coming…)
Heh.
Committed to the Inter-tubes by Buck on 10/31/2008 12:48:00 PM