So… the weather was exemplary yesterday, and I managed to get in yet another Happy Hour before winter closes in. And in so doing I cranked up my very expensive radio, aka my computational device, and tuned Pandora to the Rolling Stones station for the Happy Hour soundtrack. And was rewarded by this “blast from the past”… Ten Years After… playin’ and singin’ “I’d Love to Change the World,” circa 1971:
The lyrics got me to thinking (parenthetical aside: How is it that the brain can recall EVERY single word in the lyrics to a song that’s over 35 years old? And one you haven’t heard in at LEAST three years, perhaps more?). Things are kinda bad here in 2008, but things were arguably JUST as bad in 1971, if not worse. For those of you who weren’t around in 1971, here’s some stuff that happened that year: 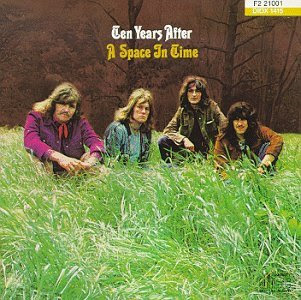 February 5 - Apollo 14 lands on the Moon.
February 8 - A new stock market index called the Nasdaq debuts.
March 1 - A bomb explodes in the men's room at the U.S. Capitol; the Weather Underground Organization claims responsibility
March 8 - Boxer Joe Frazier defeats Muhammad Ali at Madison Square Garden.
March 29 - U.S. Army Lieutenant William Calley is found guilty of 22 murders in the My Lai massacre and sentenced to life in prison (later pardoned).
April 9 - Charles Manson is sentenced to death; in 1972, the sentence for all California Death Row inmates is commuted to life imprisonment.
April 24 - Five hundred thousand people in Washington, DC and 125,000 in San Francisco march in protest against the Vietnam War.
May 3 - Anti-war militants attempt to disrupt government business in Washington, D.C.; police and military units arrest as many as 12,000, most of whom are later released.
June 27 - Concert promoter Bill Graham closes the legendary Fillmore East, which first opened on (between 5th and 6th Streets) in on .
July 5 - Right to vote: The 26th Amendment to the United States Constitution, formally certified by President Richard Nixon, lowers the voting age from 21 to 18.
August 15 - President Richard Nixon announces that the United States will no longer convert dollars to gold at a fixed value, effectively ending the Bretton Woods system. He also imposes a 90-day freeze on wages, prices and rents.
October 1 - Walt Disney World opens in Florida.
October 25 - The United Nations General Assembly admits the People's Republic of China and expels the Republic of China (or ).
October 29 - Vietnam War: Vietnamization - The total number of American troops still in Vietnam drops to a record low of 196,700 (the lowest since January 1966).
November 3 - The UNIX Programmer's Manual is published.
December 18 - The U.S. dollar is devalued for the second time in history.
Yep… it’s that ol’ “Plus ça change” thingie. But 1971, like this year, wasn’t ALL bad… as you can plainly see. I mean… Hey! Disney World!
Committed to the Inter-tubes by Buck on 10/29/2008 03:25:00 PM