A Campaign, Some Pain, and Palin 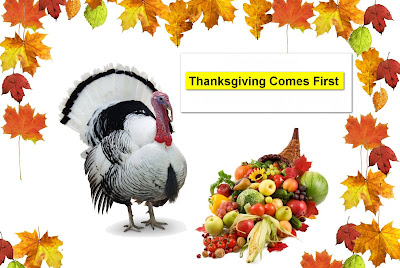 Blog-Bud Jim, aka Suldog, has launched his second annual “Thanksgiving Comes First!” campaign… and has asked those of us who agree with him… and who are the proprietors of blogs… to join the campaign. Well, I can’t think of anyone who actually approves of seeing Christmas sales, Christmas advertising, Christmas-this, or Christmas-that, before Thanksgiving has come and gone. NO ONE… period, end of report, full-stop. I’m quite sure even the employees and management of those businesses who launch Christmas before Thanksgiving is even here have a distaste for the project at hand. I mean… how could you NOT?


So. I’m on board with this. I hope you are, too. Jim has great narrative reasons and not a few rants on the subject at the link above and here, as well. Do go read.


Light blogging today. I spent one and a half hours in the dental chair yesterday getting a root canal, and I’m still a bit sore today and jes a lil bit short on what I’ll euphemistically call “good attitude.” The procedure itself is relatively painless thanks to really good anesthetics, liberally dispensed. But the length of time the procedure takes tends to take a bit out of ya… if’n ya know what I mean. An hour and a half is a long time to be flat on your back with various and sundry implements coming and going in your mouth, not to mention the interesting and unusual sounds associated with this event. It’s a little trying.


I’ve often said I’m blessed with relatively good health… in that I don’t have a weight problem, my “numbers” are all excellent, there’s no arthritis, no rheumatism, and I have none other of the minor ailments (or major ones, either) that seem to afflict us all as we grow older. Except for this “bad teeth” gene. I really should count my blessings in this space, but it’s real hard to keep one’s perspective intact… occasionally.


One final thought… or thoughts… before I go back to couch. I watched the debate last evening and I thought Sarah Palin won. Biden was a little better here and there, but Sarah scored the most points and was the more convincing of the two. Gwen Ifill did a passable… but only just… job of moderating. I would have preferred Jim Lehrer over Ifill, but who am I to say? I DO have an issue with the McCain campaign and the way they’ve “run the show” during the time since the GOP convention's been over. And rather than reinvent the wheel, I’ll just give ya what I left over at Phlegmmy’s place on the subject:


I had mixed emotions about Sarah's performance last evening. She did as well, or better, than could be expected... given her constraints. And by that I mean she was obviously instructed by the campaign to "stay on message." Her BEST moments were when she cut free from "the message" and talked about her direct experiences as governor and mayor. The woman connects with people... easily and sincerely... and the frickin' "campaign" isn't using her strengths to their advantage.

I'm beginning to think the McCain campaign is one of the most inept I've EVER seen. Missed opportunities abound... like a failure to hammer home the point HE (McCain) went after Fanny/Freddie with a vengeance while the usual suspects were at the trough... and so on.

McCain's finger-in-the-wind, focus group driven, faux populism just irritates the livin' HELL out of me, too. If I hear this "greed and corruption on Wall Street" generality without specific examples... including what he's gonna DO about it, assuming it exists... one more time I'm gonna... oh, well. I'm sure you get my drift. Very disappointing. I expected better from McCain than this. And we deserve better, too.


I have more to say on this subject, but I’ll save it for another time when I’m better able to convert thought into text. I’m at something of a nadir in this regard at the moment. Methinks more… and better… drugs are called for.