… and that economic idiot would be me, Gentle Reader. But I’ve come across a few articles that seem to be written in layman’s terms, all of which make sense to me. “Sorta,” he said… contradicting himself. YMMV, of course… but… read on.


We’ve been subjected to a lot of negative reporting and Gloom ‘N’ Doom missives on the state of our economy over the past week or so, but there IS one person who has a kind word for the American economy: Irwin Kellner, writing in MarketWatch (“Don't call it a bailout. Or a depression.Commentary: The nattering nabobs of negativism have it wrong. Here's why…”) Excerpt: 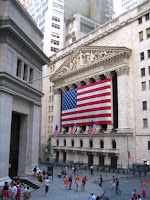 (MarketWatch) -- We are nowhere near a depression, so let's stop talking ourselves into one.

Spiro Agnew's words of the Nixon era ring true today. The politicians, pundits and, yes, the press, are nattering nabobs of negativism.


Now, don't get me wrong, I am not saying things aren't serious out there, but another Great Depression? I don't think so.

· If you look at the data, you will see more differences than similarities between the 1930s and today:

· In the crash of 1929 the Dow Jones industrials

· Home prices dropped more than 30% during the Depression vs. about 16% today.


There is a bit of a flaw in Mr. Kellner’s reasoning from my point of view. He makes an historical leap from the crash of 1929 to quote facts and figures from 1933. Which is sorta like trying to visualize what our GDP, unemployment figures, and foreclosure rates would be in 2012, if one believes the economy is going to tank based upon our sub-prime mortgage-cum-credit crisis. Still and even, I do think Mr. Kellner makes a good point, and that point is we shouldn’t try to talk ourselves into another Great Depression. I agree with Senator McCain: the American economy is fundamentally strong. Our system encourages entrepreneurship, our productivity is high, inflation and unemployment are low (for the moment, anyway), and we still lead the world in areas where it matters… like information technology, aerospace, and pharmaceuticals, just to name three industries.


So: Don’t panic. Let’s just fix it and get back to business.


Further on the subject of “Fixing It”… Here’s Joseph Calhoun, writing at Real Clear Politics (“In Times of Crisis, Trust Capitalism”). Excerpts:


The government is executing a coup d’etat of capitalism and I fear that we will pay the price for many years to come. Hank Paulson, Ben Bernanke and a host of others tell us the credit market is not working and the only way to get it working again is for the government to intervene. They claim this intervention is urgently needed and if we don’t act, the consequences are dire. Dire, as in New Depression dire. Have these supposed experts on capitalism forgotten how it really works?


Last week Goldman Sachs raised $10 billion in new capital in one day. They sold $5 billion in preferred stock and warrants to Berkshire Hathaway and also completed a secondary offering of common stock that raised another $5 billion. Friday, JP Morgan raised $10 billion in a secondary offering to help pay for the Washington Mutual takeunder. Both of these offerings were oversubscribed, meaning that the companies could have raised more capital if they wanted. There is not a shortage of capital for well run financial companies.


There is, however, a shortage of capital for companies that have acted irresponsibly with investor capital in the recent past. For some reason, our political leaders believe this is a failure of the market, but isn’t this what should be expected from rational investors? Given a choice, why would a rational investor allocate limited capital to the losers rather than the winners? If capital is really as scarce as it seems, isn’t it better for our economy if we make sure that it is allocated wisely?


Paulson has said that the cause of the current problems is the housing deflation, but that ignores the elephant in the living room. The housing bubble, which was concentrated in a relatively small number of states, was caused by the reckless actions of the Greenspan Fed. The consequences of that bubble have been exacerbated by the Bernanke Fed. The market is functioning as it should. It is the Fed that is not functioning correctly. There is no reason we had to go through either the bubble or the aftermath. We got into this mess because we tried to avoid the consequences of the Internet bubble. We will only make things worse by trying to avoid the consequences of the housing bubble.


We are not on the verge of a new depression. The housing bubble collapse in , and a few other states is not enough to bring down the entire banking system. Investors who made mistakes in these markets should be held responsible and those who navigated the Fed-distorted market should be rewarded for their wisdom and prudence. Enacting the Paulson plan will not allow that to happen and our economy will suffer for it in the long run. The Japanese tried to prop up failed banks in the aftermath of the bursting of their twin bubbles and the result was 15 years of stagnation. Why are we emulating a strategy that is a demonstrable failure? A better alternative would be to allow capitalism to work as it should and stop the interventions of the Fed in the money market. Trust capitalism. It works.


There’s an interesting and fairly lengthy discussion about the whys and wherefores of the current crisis in between the excerpts I’ve quoted, along with a prescription for solving the problem. I believe Mr. Calhoun is articulating (and quite well, at that) the reasons a large block of Republican members of the House oppose the current rescue/bail-out bill that will be voted on today. The passage of that bill is far from a done-deal, if one believes what one is hearing today. I’m beginning to have second thoughts about the wisdom of this “bail-out,” as currently written. But then again, I could stick everything I know about economics in my right eye and it wouldn’t even water…


The Economist has an alternative POV on this subject, expressed in its op-ed “Unpleasant but essential.” Excerpts:


IT MUST be one of the most unpleasant laws that Congress has found itself writing so close to an election. Devoting $700 billion of taxpayers’ money to rescuing the country’s least popular industry is not a vote winner. That Democratic and Republican congressional leaders held their noses this weekend and came up with the Emergency Economic Stabilisation Act is encouraging evidence that they appreciate the gravity of the financial crisis. “This is something that all of us will swallow hard and go forward with,” John McCain said. Barack Obama added that “What we can't do is do nothing.”


By legislative standards Congress moved at light speed after Mr Paulson and Ben Bernanke, the Federal Reserve chairman, proposed action on September 18th. Yet it may not be fast enough. In the past week the financial crisis has erupted in even more dangerous forms globally. The interbank-funds market has seized up and even the most creditworthy corporate and financial firms are paying punitive rates. Last week Washington Mutual became the largest-ever American bank to fail. In , three countries had to come to the rescue of Fortis, a Belgian banking group, and did the same with a mortgage lender, Bradford & Bingley. And on Monday Citigroup agreed to buy most of the assets of Wachovia, another beleaguered American bank, in a deal brokered by regulators.


So… this isn’t just an American problem, it’s a global problem. And that makes it pretty damned serious, doesn’t it?


Aiiieee. My head hurts. But that’s what one should expect when an economic idiot tries to understand economics, innit?