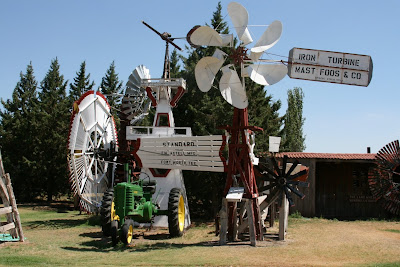 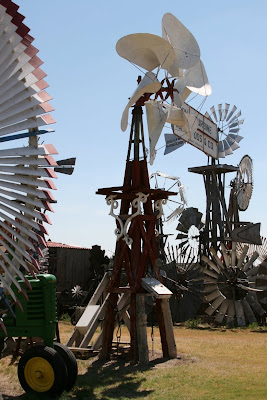 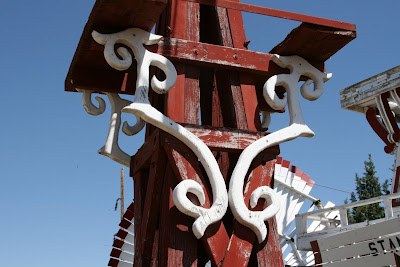 Anyone who’s traveled on the American Great Plains knows that the landscape is dotted with windmills... most of which are still functioning, drawing water for cattle and other livestock. In some parts of the country the standard joke is the windmill is the Unofficial State Tree. That’s probably true here on The High Plains of , as trees of any sort are in very short supply.

One of Portales, New ’s minor claims to fame…and they’re ALL minor, come to think on it… is The Dalley Windmill Collection. From Southeastern New Mexico (The Arts, Museums, and Must-See Sites):

The Dalley Windmill Collection
One of the residents of Portales has a collection of 75 windmills from around the world. You can drive by and see all of the beautiful windmills. On a good and windy day they will be turning and charming the eyes of viewers.
Address 1506
Phone (505) 356-6263

“A good and windy day” would be nearly any day in P-Ville, except for today. I took a ride out to the Dalley’s place earlier this afternoon to take the pictures you see here. I had hoped to talk to Mr. Dalley and get some background on his collection but no one was home…alas and alack. I was able to take pictures, though… and this post contains three such.

This is the first of what may be many windmill photos. I also put up more (and different) photos of Mr. Dalley’s windmills at The Summer Photo Project 2008. And, apropos of nothing… You’ll be able to tell when The Muse goes off to wherever it is she goes from time to time… coz there’ll be more windmill photos.