Apropos of nothing…except for the fact that there’s waaay too many frickin’ cat pictures on these here inter-tubes…here are a few pics of my late, lamented puppies. Late is an understatement: the last of these old ladies left this life back in 1996, well over ten years ago. I’ve been dog-less ever since, mostly because having a dog is semi-incompatible with my lifestyle. Yes, people who live in RVs own dogs. I’m more than aware of the fact. But a dog is a big commitment, and I tend to be commitment-averse these days. Let’s leave it at that… and get on with the biographies. 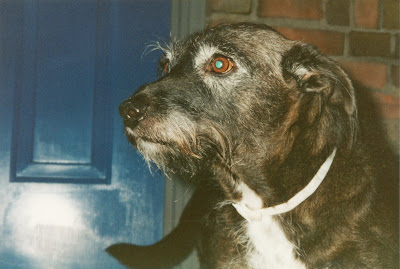 First…FiFi La Bonne, otherwise known as The World’s Ugliest Dog. She was a mixed-breed terrier and was so damned ugly she was cute. She was also a hunter extraordinaire, and was one of the few dogs I’ve ever seen who could run down a squirrel and kill it. Which she did about two or three times a year when I lived in Michigan, always making sure to bring The Second Mrs. Pennington and I some sort of trophy from the kill. We really appreciated that, ya know. She was also quite adept at assassinating gophers and moles. The gopher-hunting wasn’t nearly as popular with me, as she tended to dig huge holes in my yard in pursuit of her underground quarries. When I say “huge,” I mean bomb-shelter huge. Large enough for me to drive my riding lawn mower into one of the holes and flip the mower over on its side. That huge. 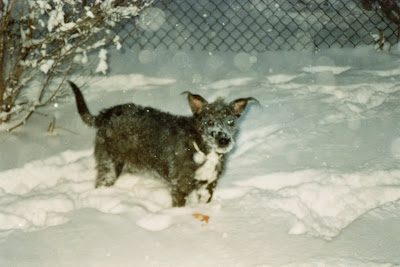 I wish the above photo of FiFi in the snow was better… she had the strangest habit of burrowing in deep snow, and it was a hoot to watch. She’s pictured after coming up from one such snow-burrowing exercise. FiFi came to live with TSMP and I while we were in Oklahoma (around 1984, or so) and lived with us until 1996, when TSMP put her down due to complications associated with old age. 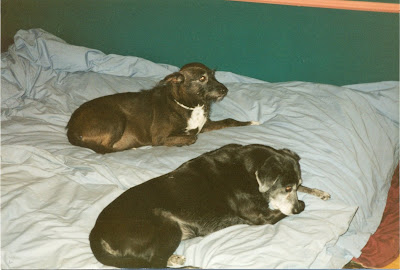 And then there’s Bōgus Dōgus, who was a Lab/Border Collie cross. TSMP and I got Dogus shortly after we arrived in in 1980, and she was with us for 16 years. She was my favorite, even though she was TSMP’s dog first and foremost. That dog was crazy… in that she had this “thing” for food. The “thing” being she’d eat anything that wouldn’t eat her first. Anything. Everything. Including, on at least two occasions, an entire loaf of bread…snatched off the table once and out of a bag of groceries another time, and consumed within 45 seconds. The first time she wolfed down a loaf of bread I thought she was gonna explode from the resulting bloat and gas. I had to put her outside until the gas went away, for what should be obvious reasons. But not until such time as she laid at my feet… moaning, farting, and generally making life uncomfortable for everyone within ten feet of her. 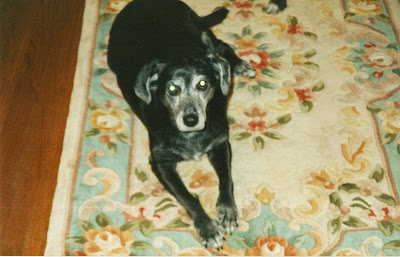 This is also the dog who tried to commit suicide by leaping off a bridge in . If we hadn’t had her on a leash she would have died in the fall to the river and it was a near-run thing, anyway. Have you ever tried to pull a strangling dog over a bridge railing? It’s not easy, Gentle Reader. As to why she jumped… I have NO earthly idea. I said she was crazy. 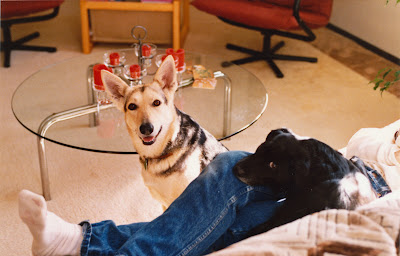 Lastly we have Fritzi Ritz, a German Shepard cross. Crossed with what breed is unknown, but a cross she was…and she was small for a Shepard. Fritzi had all the good traits of a Shepard… intelligence, loyalty, and beauty. She also suffered from hip dysplasia, which eventually got so bad we had to put her down. Fritzi was the alpha female, as might be imagined, and kept the other two dogs in line. The first pic was taken in , the second in . Each dog was a mutt; I’ve never owned a pure-bred dog. Further, two of the three were “rescued” dogs. TSMP was active in a dog rescue organization when we lived in FiFi and Fritzi arrived in our household via that organization. All three dogs slept in the bed with TSMP and me, and they each had their places…never varying position from night to night. You might think things would get a bit crowded, but it really wasn’t. They were very discreet Old Ladies, too, always being considerate enough to give us our space when it was time for TSMP and me to play. It's a great good thing dogs don't talk. Coz those dogs could have told some stories, Gentle Reader.