My God…HOW did I miss this?

Suzanne Pleshette was a lot saltier than Emily Hartley. She’d be the person you’d want to sit next to at a party because you’d be sure to hear some choice comments, delivered with sass.

Pleshette died Saturday at age 70 of respiratory failure. She had been treated for lung cancer two years ago.

Time had given her this way-out-there vitality. With her deep voice, hearty laugh and intense stare, she could have taught the Golden Girls — or female impersonators — a thing or two. You might remember that ribald quality if you ever saw her chatting with Johnny Carson on The Tonight Show.

She wasn’t the glamorous young actress anymore; she was an earthy dame, an Auntie Mame who wasn’t afraid to tell a dirty story.

Aside from being one of the leading comedic actresses of our time, Ms. Pleshette was exquisitely beautiful. And she seemed to embody everything I admire in women…self-assurance, strength, courage, brashness, unabashed sexuality, bawdiness, and beauty. In other words, I was in love with this woman…or as much as one can be “in love” with someone you don’t know. I saw her just last month on a re-run episode of the PBS series “American Masters,” where she was featured prominently in the episode on Bob Newhart. She looked wonderful, and I had no idea she was seriously ill. Then again, I don’t know when the Newhart episode was filmed, either.

I don’t keep up with celebrity news (obviously), but I am deeply saddened by Ms. Pleshette’s passing. She brought joy into my life and convinced me it was possible to find a woman who had all those qualities she projected so effortlessly. I did find that woman and spent 23 years with her. And she was a lot like Ms. Pleshette…or at least very much like Ms. Pleshette’s public persona.

RIP, Suzanne. And thanks.

So…last night I was watching the Winter X Games on ESPN…and these guys were doing extreme snowmobile racing (“speed and style”) and…wait for it… back flips… on snowmobiles, no less. Gad. “Only in ” and all that, but it was fairly riveting teevee. You know what caught my ear, though? The commentators, remarking on the aerial derring-do of one of the winning snowmobile guys: “That was something you’d expect to see from the Thunderbirds…not a snowmobiler.” Note he said “Thunderbirds.” He didn’t say “That Other Team,” who…umm…come around every now and then with outstretched hands (or open mouths, kinda like baby birds. You choose.).

There’s a lesson there.

The NYT has come out with their endorsements for ’s primary and they’re predictable, if nothing else. First: John McCain:

We have strong disagreements with all the Republicans running for president. The leading candidates have no plan for getting American troops out of . They are too wedded to discredited economic theories and unwilling even now to break with the legacy of President Bush. We disagree with them strongly on what makes a good Supreme Court justice.

Still, there is a choice to be made, and it is an easy one. Senator John McCain of is the only Republican who promises to end the George Bush style of governing from and on behalf of a small, angry fringe. With a record of working across the aisle to develop sound bipartisan legislation, he would offer a choice to a broader range of Americans than the rest of the Republican field.

I didn’t quote the Rudy bashing bits, or the general Left-Wing angst that runs through the whole endorsement (I use the term loosely)…which damns McCain with faint praise. But, at least the editors are up-front and open about their biases and discredited theories on the war. (I had to work that “discredited theories” phrase in here, somewhere.) Speaking of discredited… here’s their Democrat endorsement:

The early primaries produced two powerful main contenders: Hillary Clinton, the brilliant if at times harsh-sounding senator from ; and Barack Obama, the incandescent if still undefined senator from . The remaining long shot, John Edwards, has enlivened the race with his own brand of raw populism.

As Democrats look ahead to the primaries in the biggest states on Feb. 5, The Times’s editorial board strongly recommends that they select Hillary Clinton as their nominee for the 2008 presidential election.

We have enjoyed hearing Mr. Edwards’s fiery oratory, but we cannot support his candidacy. The former senator from has repudiated so many of his earlier positions, so many of his Senate votes, that we’re not sure where he stands. We certainly don’t buy the notion that he can hold back the tide of globalization.

By choosing Mrs. Clinton, we are not denying Mr. Obama’s appeal or his gifts. The idea of the first African-American nominee of a major party also is exhilarating, and so is the prospect of the first woman nominee. “Firstness” is not a reason to choose. The times that false choice has been raised, more often by Mrs. Clinton, have tarnished the campaign.

Sounds like the inane sort of comment we get from sportscasters, doesn’t it? As in “it’s too bad one of these teams have to lose…they’re BOTH winners!” or some such fluff. Another interesting thing…the McCain endorsement fits on one NYT page, the Hillary endorsement runs two (web) pages. Because there’s just so much more to say about The Good Guys! Then again, if you took the Bush-bashing out of the Democrat endorsement, you wouldn’t have much left. I think the NYT is really gonna miss Dubya when he goes, along with the NBC, ABC, and…oh Hell… I don’t really need to flog this dead horse yet again.

Today’s (From The Archives) Pics: A Brit pub sign that could very easily have been my motto back in the day. Hell...it was my motto. 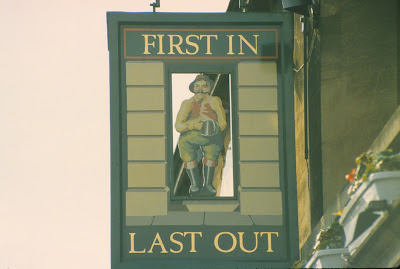 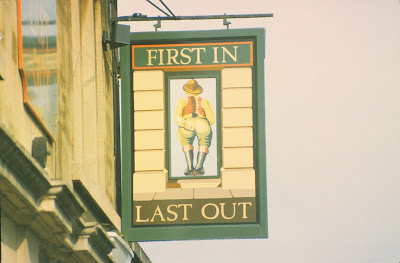 Update 1/25/2008 1235 hrs.: re: Today's NYT Republican endorsement. The Corner at NRO catches the NYT talking out of both sides of their mouth about Rudy. Good stuff. And a better point... NRO asks the rhetorical question "Which editorial is right?" And delivers an appropriate answer, too.