Well, it’s Sunday. Big Doin’s for NFL fans today and for masochists from all over the , if not the world, who will tune into the NFC game just to watch people suffer. In a good way, of course. Hell, I might even watch. I watch the playoffs in nearly every other sport, but rarely pro-football. That might change today. There’s sure to be lotsa crowd shots of people in whose sensibilities and/or sanity I question. Am I being redundant by sayin’ that? I mean…you have to be jes a lil bit “off” to live in that part of the world, dontcha?

Before I move on to (arguably) “bigger and better” things…there’s this… Best comment on a blog I read yesterday:
· Comment by happyfeet on 1/19 @ #
Is that different from muesli? I like muesli. Kashi is kind of like muesli plus you get interracial lesbians. Yay!

Yes, it really is a comment. There’s a link hiding up there.

So, it’s Sunday. And once upon a time, in another world, another time, another season, and another life, I would be doing this: 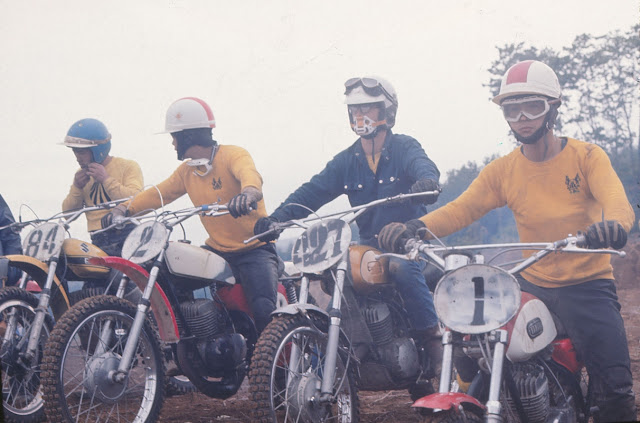 The pic is of YrHmblScrb and several dedicated competitors on the starting line somewhere in the wilds of Hokkaido, sometime in the summer of 1969 or perhaps 1970. The time period is before motocross caught on as a Big Time Sport in the , and is exactly the point in time when the Nipponese fielded their very first purpose-built MX bikes. Up until about 1971 (or so) if you wanted a competitive MXer you didn’t buy a Yamaha, a Honda, or a Suzuki…you bought a CZ, a Maico, a Husky, or maybe a Bultaco. European, in other words. Or…you could do as most of us did (at least those of us who raced in ), you bought a stock dual-purpose bike, tore it down, and rebuilt it with factory “race kits” and after-market items. Like my friends and I did with Yamaha’s immortal DT-1, an example of which I’m sitting astride in this starting line shot. 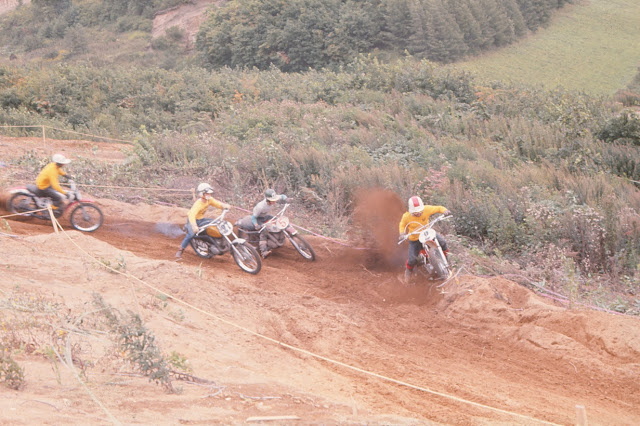 Motocross in was interesting, to say the very least. Especially in Hokkaido, where the races were generally held on ski slopes, which made for fine MX tracks… what with the changes in elevation, off-camber corners, and relatively wide open straights. That was just the physical aspect of the racing… there were also cultural differences which made for some “interesting” times, not to mention great good learning experiences. And lots of drunken evenings with the local club(s) after practice on Saturday. First and foremost, though: the Nipponese were fierce competitors, and they were competitors with a great sense of honor. There was very little, if any, “dirty” racing; we were all in it for the fun of it. The “fun of it” is pretty much the way amateur racing is anyway, no matter where you go. 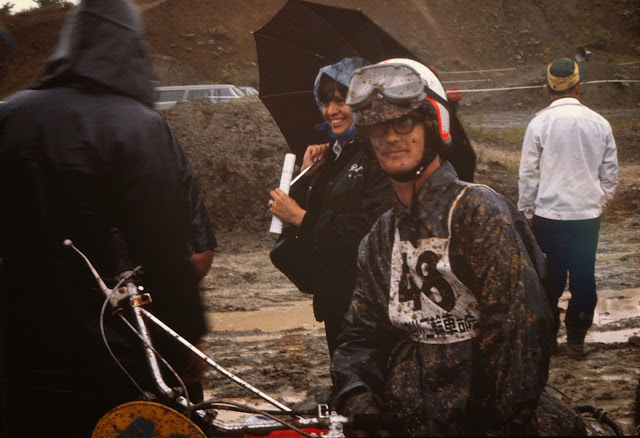 Lotsa fun. And lots of memories, too many of which have faded away, unfortunately. One memory that sticks in my mind, though, is of the evening my friends and I were at the public bath in some small Japanese town after either a hard day of racing or a hard day of practice before the race. Japanese public baths are segregated by gender, with the larger baths having separate facilities for men and women. The smaller baths, however, usually only had a partition (think: movable wall) that separated the men’s and women’s areas in the large soaking bath. And that partition was less than effective. If one really wanted to look into “the other side” from your side… well, it wasn’t hard to do.

So… there we were… several of us Yankee GI bike racers, soaking in the bath, and there she was… on the other side of the partition, doing the same thing, yet coyly coming into our view every so often. And she was pretty well-built for a Japanese woman, who are generally not known for being… um… well endowed. One could NOT help but notice, and we were certain she was noticing us, as well. But nothing was revealed, really… until one of us, and I really, truly, do not remember who… stood up and gave the lady a lil show of sorts. And she reciprocated, knocking us back on our collective asses, figuratively speaking. It wasn’t blatantly erotic or meant as a come-on, or anything else in that space…just an unobstructed 360-degree view of the “goods,” so to speak, and such very fine goods they were, too. And just as quickly as it began, it was over. She exited the bath with her towel wrapped around her and a big smile on her face. Made our day, she did.  (I’ve told this story elsewhere on the blog, but damned if I can find it…and I looked, too.)

So, anyway. I continued my racing career for a brief time after returning to the (to Boron Air Force Station, a great assignment for a dirt biker!) and here’s a shot of YrHmblScrb after a Hare and Hounds somewhere in the great . The pic was snapped immediately after I pulled into the pits, and I’m exhausted…which is fairly plain to see. 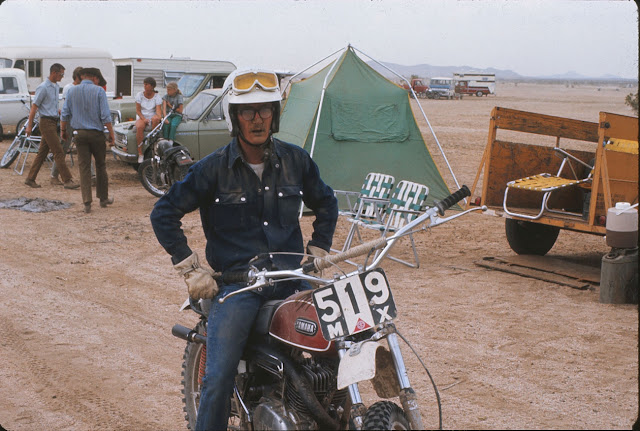 My racing days came to an end when I (a) got assigned to for a year and (b) got old and slow. MX is essentially a young man’s game, although there are classes for “Over 40” and “Seniors” and the like. But that ain’t me. It was a of fun at the time…but times change.

By the way…that woman with the captivating smile behind me in the mud picture? That’s The First Mrs. Pennington. Lovely, isn’t she?
Committed to the Inter-tubes by Buck on 1/20/2008 01:07:00 PM