An interesting thought posted by Erick at RedState:

Tonight was not a failure of conservatism, but a triumph of military voters who have made their home in the Republican Party because we are the party of a strong national defense.
In both and , they won it for McCain. In the grand coalition of the GOP, we've talked about social conservatives and fiscal conservatives. We've all ignored the military voters, except John McCain. And he won them big. His message resonated.
And the man still has an +80% conservative rating. I shed no tears.
That may, in fact, be true. It’s just that a “military vote” isn’t widely discussed, although it is mentioned from time to time. I remember hearing Fox News analysts invoking the fact that SC has the largest numbers of military retirees in the country and the polling (such as it is) indicated they were breaking for McCain. I heard the same sorts of comments about voters in the area, which also has a large number of military retirees and active-duty types. Not mentioned on any broadcast I saw was the panhandle, which also has a large military and retired military population…think Pensacola, Fort Walton Beach, Panama City, and Destin. BIG military presence. So this could very well be true.
Strange, for a country with so few people who actually serve in the military these days. But, that wasn’t always so and there are a lot of former military folks from the ‘60s, ‘70s, and ‘80s still around. That and the fact us retirees tend to live a lot longer these days. And we tend to vote Republican, although there are exceptions to each and every rule.
Old Farts are like that. See also Sir Churchill, Winston…False Attributions Dept.
―:☺:―
Truth: 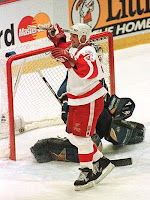 Detroit Red Wings defenceman Brett Lebda lay in a heap on the ice, propelled head-first into the boards by a check from behind delivered by St. Louis Blues winger Ville Nieminen.
The incident occurred late last season and though Nieminen was ejected from the game and later suspended, in old-school fashion, he wasn't forced to answer for his crime within the arena.
In the press box, former Blues tough guy and current team radio analyst Kelly Chase scowled.
"When I played, I didn't have to call (National Hockey League commissioner) Gary Bettman to find out what the punishment was for running a guy from behind in Detroit," Chase said. "The punishment was (Bob) Probert and (Joe) Kocur." According to popular logic, the reason why this form of capital punishment is no longer delivered is the instigator rule.
Bob Probert and Joey Kocur, aka “The Bruise Brothers,” were mythic sports heroes in back when I became a hockey fan (that would be 1985, Gentle Reader). And “mythic” ain’t hyperbole in the least. Even I considered building an altar in my basement to these guys. I’m only half-kidding. Twenty years on the Bruise Brothers are still revered in and just across the river in , where Probert lives today. And in certain parts of , I should add.
I’ve written about Probert before, and probably should devote a post to Joey, as well. After all, Joey came back to the Red Wings and played on two of three Stanley Cup-winning teams of the recent era, most notably the ‘96 – ‘97 season, when Joey was signed as a free agent just before the play-offs began. Prior to the signing Kocur had been playing hockey in a seniors league in suburban . A seniors league! How’s that for a comeback, eh?
―:☺:― 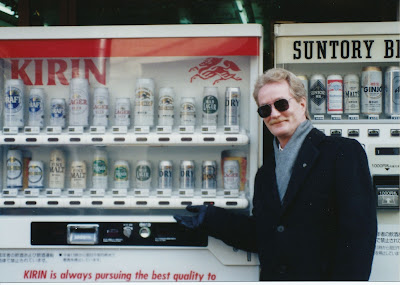 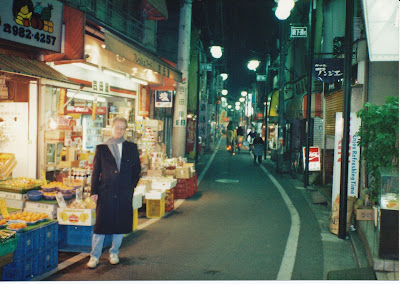 Today’s Pics: “Why I Love Japan.” Beer. In vending machines. On the street, unattended, 7x24x365. You pays your yen, you makes your choice. Note the Budweiser in the Suntory machine. I’ll have a , thankyouverymuch. Or I’ll walk down the block and find a machine. There’s another beer machine in the second pic, lurking behind that pole on the right.
December, 1991. The Second Mrs. Pennington and I spent Christmas with friends in that year, on our way home from . This street is near the apartment of TSMP’s girlfriend Junko. That’s the girl TSMP raised Hell with during her senior year in high school, and continued raising Hell with in the years to follow…although Junko became a married lady (with children!) and wasn’t into the Hell-raising biz all that much after becoming a mom. It happens like that.
Committed to the Inter-tubes by Buck on 1/30/2008 11:05:00 AM