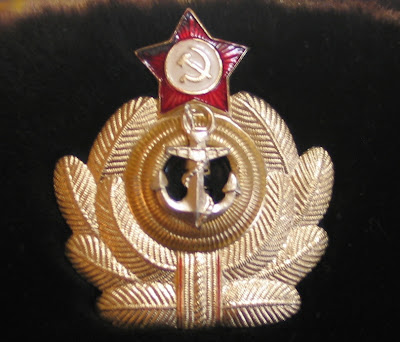 …on that Rooshian hat, among other things. Pictured immediately above is a detail shot of the hat insignia, which, as I indicated in the original post below, is Russian Navy. The enamel on the Red Star is coming undone, if you look closely. The good news is it was that way when I bought the badge (hat and insignia sold separately, see vendors for details), the better news is that the deterioration doesn’t seem to be getting any worse after these 15 or so years.

Pictured immediately below is another souvenir from the trips: a gen-u-wine Red Army belt and brass belt buckle. The buckle is in dire need of polishing and I was gonna do just that for you, Gentle Reader. Until I retrieved my can of Brasso from under the sink, only to find its contents have long since evaporated into the ether and beyond. 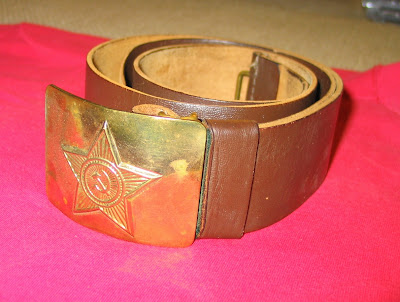 I lusted after one of these belts since the first time I saw one back in the late ‘60s or very early ‘70s. I was assigned to USAFSS (at Wakkanai AS, more about which…here) in 1968 when I saw my first Red Army belt… or three, or six. USAFSS was a fairly insular org for some career fields back in the day, especially the Russian linguists. These linguists would shuttle from assignment to assignment at “listening” sites we had around the periphery of the old . One such site was the 6912th Security Group in . There were three ways to get to Berlin at the height of the Cold War…one could fly, drive in convoys from the West German border to Berlin on an approved route (with NO deviations allowed!), or one could take the “Duty Train.” And the Duty Train was where most of the guys I knew got their belts.

To cut right to the chase… the Duty Train stopped for “inspection” at multiple locations during the transit from into . These inspections were mostly performed by the East German Border Guards, but there were always contingents of Red Army (read: Russian) troops hanging around…either participating in the inspections (“Show us your papers!”) or observing. Those Red Army troops just loved Playboys, American cigarettes, and American whiskey…and were more than willing to trade the shirts off their backs, or their hats, or their belts… for same. That’s how 96.9% of the guys I knew got their belts. The going rate was a carton of cigs for a belt...straight across. A fifth of whiskey would buy you a belt and additional treasures, as well, but I digress. And you couldn’t buy one of these Red Army belts/buckles from the guys that had them at any price…the belt buckles were among the most prized souvenirs of the times.

Fast-forward to the ‘90s and my first biz trip to . One can imagine my absolute delight at finding all SORTS of Soviet military memorabilia for sale in the biggest danged flea market I’ve ever seen. One could literally buy entire uniforms, including boots and all the appropriate insignia, there. Not to mention actual military equipment (but no weapons were visible) being sold out of the back of Russian Army trucks, and I kid thee not. One member of my team bought fully-functional night-vision goggles for around $200.00 at the same flea market where I bought my hat and belt. I wasn’t ready to go that far, Gentle Reader, what with being concerned I’d get ripped off (how do you know they work, in broad daylight?) and a great deal more concerned about an out-going customs officer finding them in my luggage as I was leaving the country (My friend got away clean, however, sailing through the departure customs inspection.). The prospect of an espionage trial just didn’t appeal to me…at all. I limited my purchases to the hat, belt, various pins and such, and other, non-military souvenirs.

And lots of vodka and caviar, of course.