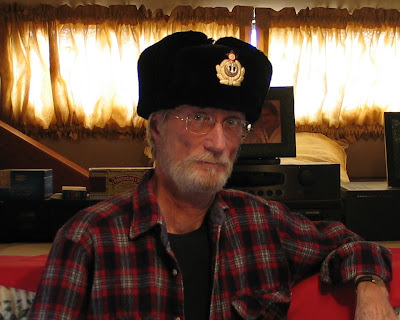 ... a pic of my Rooshian hat. In case you're wondering, Gentle Reader, Doc's profile photo shows him in a hat of similar design and origins; I told him I'd post a pic of mine. And so I have.

I bought the hat in a flea market while on one of my business trips to Moscow in the early '90s. I wanted a Russian air force hat for what should be obvious reasons...but, alas, there were none to be found that day. So...I bought the hat you see here, in Russian Navy Blue, which... all credit to our Russian comrades... is actually blue (the leather bits, not the fur)...unlike US Navy "blue," which we all know is black. Those of us with unimpaired color vision, anyway.

Being the anal-retentive stickler for accuracy that I am, the hat emblem is also Russian Navy. I could have put Russian Air Force insignia on the hat and no one... I repeat, no one... outside of Russia would have been the wiser for it. Except me.