Readin' the News and It Sure Is Bad...

…the title is a hat-tip to Joni. But it’s true. Today.

Bad News from … Labor sweeps to a huge win and John Howard…one of ’s strongest and most articulate allies in the war against Islamofascism… is out. Kevin Rudd, the Australian Prime Minister-to-be, ran on a platform of withdrawing Australian troops from and signing the Kyoto Protocol immediately (among other things). Jules Crittenden sez it’s a move to Pre-9/11 politics. I say it sucks.

Captain Ed, OTOH, predicts it will be “business as usual” with , no matter who’s in charge. The Guardian, in their profile of Rudd (who speaks fluent Mandarin!), seemingly agrees. Let us pray…

-- Nearly two-thirds of Americans believe the federal government had warnings about 9/11 but decided to ignore them, a national survey found.

And that's not the only conspiracy theory with a huge number of true believers in the .

The poll found that more than one out of three Americans believe Washington is concealing the truth about UFOs and the Kennedy assassination - and most everyone is sure the rise in gas prices is one vast oil-industry conspiracy.

Sixty-two percent of those polled thought it was "very likely" or "somewhat likely" that federal officials turned a blind eye to specific warnings of the 2001 attacks on the and Pentagon.

Shocking, indeed. Are we really that frickin’ stupid? Don’t answer that…

News You Can Use…Mashable publishes a link to 33 sites with (mostly) free stock photos and backgrounds that can be used on your blog… or elsewhere…without fear of copyright infringement. Most of the photo sites require a link-back or an attribution for a photo you use but that’s only common courtesy, innit? I’ve bookmarked the link.

A Senior Moment… yesterday. Right here at El Casa Móvil De Pennington. I completely forgot it was a holiday Friday, and as such was loaded-up with potentially great college football. I missed another good one, to wit: LSU came up short in a second triple overtime loss. At home this time. Wow. And those Aggies beat Texas, while USC demolished…destroyed… . And I missed it all.

But I won’t miss today’s games. Not on your life! 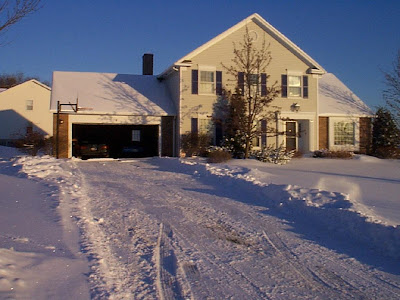 Today’s Pic: It’s another cold and snowy day here on The High Plains of . And that’s not too bad, seeing as how today is only Day Two Three of our current cold snap. At any rate, whenever I find myself feeling sorry for myself (about the weather, anyway) I only have to go back into the archives to see it could be…and was…worse. Once upon a time.

This is a (grainy first-generation digital) photo of the Ol’ Homestead in Perinton, New York, taken on a crystal-clear and numbingly cold morning following a six-inch (or more like eight inches) snowfall. As I said: worse.