It's been less than a week since 's Sen. Hillary Clinton and Gov. Eliot Spitzer had to climb down from their support of driver's licenses for illegal aliens. Now House Speaker Nancy Pelosi has moved to kill an amendment that would protect employers from federal lawsuits for requiring their workers to speak English. Among the employers targeted by such lawsuits: the Salvation Army.

Sen. Lamar Alexander, a moderate Republican from , is dumbstruck that legislation he views as simple common sense would be blocked. He noted that the full Senate passed his amendment to shield the Salvation Army by 75-19 last month, and the House followed suit with a 218-186 vote just this month. "I cannot imagine that the framers of the 1964 Civil Rights Act intended to say that it's discrimination for a shoe shop owner to say to his or her employee, 'I want you to be able to speak 's common language on the job,' " he told the Senate last Thursday.

But that's exactly what the Equal Employment Opportunity Commission is trying to do. In March the EEOC sued the Salvation Army because its thrift store in , required its employees to speak English on the job. The requirement was clearly posted and employees were given a year to learn the language. The EEOC claimed the store had fired two Hispanic employees for continuing to speak Spanish on the job. It said that the firings violated the law because the English-only policy was not "relevant" to job performance or safety.

Words fail me. They really do. Is this , or not*? But, Hey! This is Madame Speaker we’re on about. I suppose nothing that ditzy woman does should surprise me, eh? Still and even: Eso es realmente estúpido. I’m sure you get my drift, .

* Semi-rhetorical question, that… I considered getting into the whole Aztlán thing and the soft bigotry of low expectations, as exhibited by the prime movers behind Pelosi’s latest stupidity. But I don’t want to go there. Now. Maybe later.

Wow! Who’d a thunk it? ? And the pronouncement comes from…wait for it…the Michelin (Red) Guide?

, the neon-clad home of the pickled sea-slug and horseradish chocolate, has eclipsed , and to become, officially, the most delicious city on earth.

The Japanese capital was handed the coveted crown by Michelin, the French tyre company whose famous “Guides Rouges” have been every bon viveur's bible for more than a century.

Eight restaurants, including two high-end sushi joints — one of them with fewer than a dozen seats — and the esteemed 95-year old Hamadaya traditional Japanese restaurant, were awarded the sought-after “three star” status.

The massive haul of stars - more than the combined 148 starred establishments in and - beats all other locations covered by the guides. Publishing Michelin Guide for , its compilers declared that the city was now the undisputed “world leader” in fine dining.

The compilers themselves said that the most surprising discovery was not the quality of the food in but the sheer number of restaurants operating in the world's largest capital city. The 150 establishments that achieved a star grade were whittled-down from a starting line-up of 190,000 registered eateries in metropolitan .

As the article notes, Michelin’s rating comes as no surprise to Tokyoites and the Japanese at large (and YrHmblScrb, too). But the French? That’s the surprising bit, for me. First they elect Sarkozy and now they say is a better gastronomic experience than the City of ? Sacré bleu! Qu'est-ce que c’est, ça?

For the males amongst us: Feeling kinda dumb of late? Then maybe you should quit hanging out with blondes…

Researchers discovered what might be called the “bimbo delusion” by studying men’s ability to complete general knowledge tests after exposure to different women. The academics found that men’s scores fell after they were shown pictures of blondes.

I don’t believe a freakin’ word of this. (Full disclosure: The Second Mrs. Pennington is/was a “natural blonde.”) But it IS amusing, in a bizarre sort of way. And the study was “peer reviewed,” for what that’s worth…

And finally…It hurts to read this: 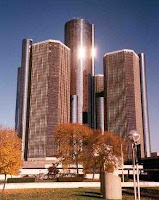 -- In another blow to the 's tarnished image, pushed past to become the nation's most dangerous city, according to a private research group's controversial analysis, released Sunday, of annual FBI crime statistics.

was pegged the nation's murder capital in the 1980s and has lost nearly 1 million people since 1950, according to the Census Bureau. Downtown sports stadiums and corporate headquarters _ along with the redevelopment of the riverfront of this city of 919,000 _ have slowed but not reversed the decline. Officials have said crime reports don't help.

I lived in Deetroit in the 80s. That “murder capital of the ” thing was taken with a grain of salt and a dollop of humor, as well. For a time Detroiters walked around sporting tee shirts that said something to the effect of “I’m so tough I vacation in !” As for me, I had one (long gone, now) that said “: Attitude capital of the world!” And it certainly was that. You need attitude to live in that sort of environment. Unfortunately.

gets enough bad press; they don’t need any more.