It was about 30 years ago... give or take a couple... that a kindly young Air Force dentist advised me to get orthodontic work done after completing some routine restorative work in my mouth, which is to say: a filling or two. He even gave me the name of a dental school buddy of his, whom, he said, would give me a “military discount.” During our conversation I asked if he had any idea what the required orthodontia would cost. His reply? “Three to five thousand dollars. You need a lot of work, given the over-crowding and general misalignment of your teeth.” He went on to tell me that if I chose NOT to have this work done I would have severe dental “issues” in later life. 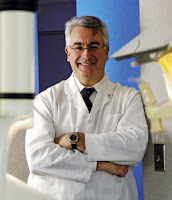 I don’t have many occasions to regret decisions I’ve made in my life, but this is definitely one such case. Alas, that $3K was well and truly out of the question at that point in time. Even considering the fact I was a Tech Sergeant back then and wasn’t dirt-poor, I wasn’t all that far out of the dirt, what with being recently divorced and about to remarry. Keep in mind― this is 1977 we’re talking about, and three thousand Yankee dollars was a rather princely sum in those days, particularly to a mid-grade NCO. Life, as it’s said, has its priorities… and my teeth weren’t high on my personal priority list. They should have been.

Yesterday my dentist gave me some bad news and suggested a course of action that I have to mull over during the coming week. He suggests I consider dental implants; we have an appointment next Tuesday to go over the exact treatment options, which he will work up after reviewing my history, my x-rays, the results of his analysis, and so on. As for me, I have to do a lil research on the subject.

I like the concept of implants…they appear to beat bridge work, i.e., false teeth, hands-down. But implants have at least one serious drawback: they ain’t cheap. I shudder at the thought of what this work will actually cost, which will be revealed during my consultation next Tuesday. There are other drawbacks as well. Implants take time, and a lot of it. I'll probably need bone restoration work before the actual implants can be installed, and that process alone can take up to four months. The whole implant process could take up to a year, with six to eight months a reasonable estimate in my specific case. And, even considering the remarkably pain-free nature of modern dentistry, work of this nature ain't exactly painless. There will be multiple surgeries involved. But…of all the alternatives out there, implants seem to be the best.

So much for my new Miata.

(That’s not my dentist, btw. Just a stock image.)