So. The early arrival of Miss Zukiko kinda knocked life into a cocked hat. Actually, buying Miss Zukiko disrupted life as we know it here at El Casa Móvil De Pennington. I really have a lot of backlogged but mundane stuff to do…like restock the larder, wash the Green Hornet, get a haircut, and that most hated of all chores: laundry. Laundry can and will wait until tomorrow, as I’ve yet to dip into the emergency supply of vintage clothing. But the re-supply run absolutely, positively must occur today. I’m nearly out of coffee and other mission-essential items. I’ve already fired one J-4 because I ran out of one thing or another…I don’t want to have to do that again.

Here’s an interesting lil collection of pictures and a short narrative about the Isle of Man TT races 20 years ago. 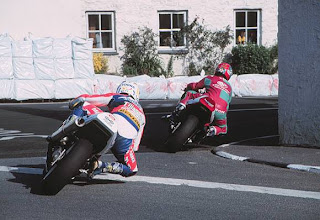 It’s not much of an island, really, the Isle of Man. Just 33 miles long and 12½ wide, it lies quietly in the , midway between and . But for 100 years now, as May gives way to June, the grows exponentially in stature as it welcomes thousands upon thousands of motorcyclists, there to take part in TT Week, one of the sport’s great happenings.
Twenty years ago, I was one of those thousands, riding a Cagiva 650SS up from the riveted bowels of the ferry ship Lady of Man onto the dockside at , the ’s capital city. I was there as part of Cycle World’s assault on the TT, spearheaded by Editor-at-Large Steve Thompson, riding a Suzuki GSX-R750 in the Production race.
I’ve told you before, Gentle Reader, that my absolute PEAK motorcycling experience was when I went to the IoM TT in 1982. If you follow the link you’ll get some small idea of what it’s like to be in the during TT week. There’s nothing else in all the motorcycling world that can compare. Nothing. Don’t even try to tell me Daytona or Sturgis come close, because they don’t. Key difference? Racing speeds up to (and exceeding) 150 mph on winding public roads, through towns, up hills and over dales. Not to mention the fabulous OKell’s…taken with a hearty whiff of bean oil as the racers flash by. Ah, memories. It simply doesn’t get any better than the IoM during TT week. For bikers, anyway.
(Photo credit: Grant and Susan Johnson. More excellent photos and narrative at the link.)
Seen this yet? Way kewl. And addicting. (h/t: A Soldier’s Wife)
I’ll be back after the re-supply run. 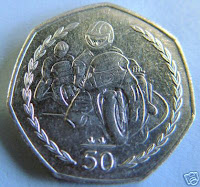 Update: Forgot to mention that the IoM government issues a commemorative coin each year for the TT races. I have a couple laying about in the souvenir stash, somewhere. This particular 50-pence coin isn't mine, but it's representative. Click for larger.