Out of a nation of now 300 million people, who really cares about the young men and women we send into harm's way?

Let's see. Those on active duty obviously care, their families care, veterans care, a small number in the media care, some states like care more than others, and a minute amount of the national population actually cares. But for the vast majority of the rest , the young men and women who serve on the front lines and protect us from evil are all but invisible. They don't exist in our lives, they occupy no space in our minds, and their sacrifice goes unnoticed and unappreciated.

Many on the far left think those in uniform are fools, puppets or even war criminals. Witness the already controversial ad run in the New York Times last week by MoveOn.org that intimates Gen. David Petraeus — a nonpartisan professional soldier of impeccable reputation — may in fact be "General Betray Us." Is that their "support" for our troops?

Politicians who speak for the far left often say, "I support the troops but not the war." Proudly, liberal Democratic presidential candidate Dennis Kucinich, D-Ohio, often parrots that exact phrase. This is the same man who, while in the terrorist-sponsoring state of Syria, just denounced the Iraq war on Syrian television and praised Syrian President Bashar al-Assad— a dictator who, according to our intelligence agencies, allows and encourages Islamists to cross his border into Iraq to kill U.S. soldiers. Is that "support" as defined by Kucinich?

What about the far right? What about those who purport to speak for my party? Paul Wolfowitz, Douglas Feith and Steve Cambone were three high-level political appointees in the Rumsfeld Pentagon who were instrumental in planning the war and wildly underestimating the response. Do they "support" our troops? What price do these, never been in the military, ivory tower academics pay for their gross miscalculations?

As they move forward with their careers and makes hundreds of thousands to millions of dollars, what support do they offer to the families of the almost 4,000 killed and 30,000 wounded?

The author, Douglas MacKinnon, used to work for Senator Bob Dole. Mr. MacKinnon makes some excellent points (especially about the media), but I’m not sure I agree with his conclusion. But then again, perhaps I’m just out of touch with mainstream . Life in a small community with a very visible military presence just might skew my point of view. We here on The High Plains see our Air Force every single day…and we’re thankful for them, too… just as we are proud of, and thankful for, our soldiers, sailors, Marines, and Coasties. We just don’t see those guys as often. That doesn’t mean we’re not thinking about them.

Out of sight is NOT out of mind.

You may have read about that mysterious Israeli air strike on that took place last week. The Times () had an interesting article about it yesterday, but that article didn’t say a whole lot, in the final accounting. TigerHawk, on the other hand, has some very interesting speculation on the subject. I say “speculation” because I’m quite sure he doesn’t really know what happened…and those in a position to know certainly aren’t saying. Be sure to scroll down and read the comments, one of which also appears to be very well-informed. Osirak, redux…indeed. Except this time the Iranians might well be on the receiving end. And that ain’t a bad thing. Not at all.

My bottom line? Thank GOD for the Israelis.

Here’s a follow-up to yesterday’s post rant about that frickin’ Hamsher person…and I use the term “person” quite lightly… “witch,” or a term rhyming with same, just might be more appropriate. But I digress. Darleen Click, posting at Protein Wisdom, has more “greatest hits” from the comments to Hamsher’s post, and they’ll curl your hair. But be sure to go, if only to get a look at the cover of Hamsher’s new romance novel: “Disciplining Elizabeth.” Classic.

Performance Art I might could enjoy…maybe. And that’s a big maybe. I’ve always laughed at the concept of “performance art” in the past, but that was before (a) there were motorcycles involved in (b) a cause to save an historic building. Both those facts in combination just might change my mind about the concept. Well, that and nekkid women topless cello players. (ed: Did you really say that? Ummm, yep, I did. But I was joking.)

But then again, it’s a “by invitation” performance, and I wasn’t invited. But if I had been invited, the chances are that I, and most everyone else, would enjoy this. Assuming one doesn’t mind a little smoke and more than a little noise. Well, “noise” is in the ear of the beholder, ain’t it? One man's noise is another's music...especially in this case.

Finally, apropos of not much… I heard this tune… which is new to me… yesterday evening. The lyrics struck a chord, but the music is just so-so, what with being described by RP listeners as reminiscent of Cake and/or Leonard Cohen. LC I like, Cake…not so much. But, as I said: it’s the lyrics. Herewith, lyrics to “The Wonderful Wizard,” by The Guggenheim Grotto.

“A solitary soul is a thorn in the side of all others.” You think that’s true, Gentle Reader? I’m not quite sure why, but I do. 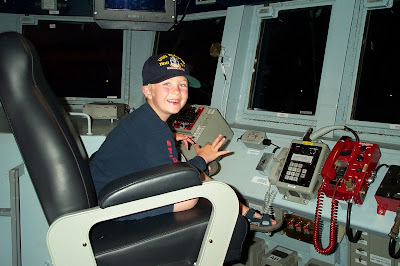 Today’s Pic: SN3 on the (DDG 87). Bobby was six years old. The Mason was pretty much brand-new.