Just a nit, but worth a mention… My neighbor across the way got out and began mowing his lawn at precisely 0700 this morning. Sunday morning. I think that’s rude and inconsiderate. It’s the noise, Gentle Reader. Power mowers are loud and their sound is obnoxious at all times, but on Sunday morning it’s particularly so, especially in an environment where residents live in close quarters. I say this with the full understanding that it’s much easier to mow the lawn when it’s 68 degrees outside, vice 85 and up. But couldn’t you wait until 0830, say? I think you could.

Oh…I had been up since 0500, so the noise didn’t awaken me. Irritate me, yes. Wake me up? If it had been yesterday, yes. But not today.
On nerds…in today’s NYT (Who’s a Nerd, Anyway?):
By cultivating an identity perceived as white to the point of excess, nerds deny themselves the aura of normality that is usually one of the perks of being white. Bucholtz sees something to admire here. In declining to appropriate African-American youth culture, thereby “refusing to exercise the racial privilege upon which white youth cultures are founded,” she writes, nerds may even be viewed as “traitors to whiteness.” You might say they know that a culture based on theft is a culture not worth having. On the other hand, the code of conspicuous intellectualism in the nerd cliques Bucholtz observed may shut out “black students who chose not to openly display their abilities.” This is especially disturbing at a time when African-American students can be stigmatized by other African-American students if they’re too obviously diligent about school. Even more problematic, “Nerds’ dismissal of black cultural practices often led them to discount the possibility of friendship with black students,” even if the nerds were involved in political activities like protesting against the dismantling of affirmative action in schools. If nerdiness, as Bucholtz suggests, can be a rebellion against the cool white kids and their use of black culture, it’s a rebellion with a limited membership.
Cue up the Geico caveman, please. To wit: “Yeah, I’ve got a response… uh … WHAT?”
It’s WAR! Normally I’m a live-and-let-live kinda guy, and my tolerance extends to creatures great and small. Included in the “small” community are various bugs, with the exception of flies and mosquitoes, which are terminated immediately with extreme prejudice…always. Take spiders, for example. Spiders are generally good, as they eat other small critters and generally stay out of my way. And I enjoy their webs, which are both small-scale engineering feats and supremely artistic, as well…as anyone who’s seen an early morning web covered in sparkling dew will attest.
My tolerance ends, though, when spiders begin to overwhelm my personal space and get presumptuous about territory and such, thinking it’s theirs for the taking. While I love and appreciate outdoor webs I don’t like to see the things hanging off my table lamp, or worse, have a small spider drop down on a gossamer filament right in front of my face while I’m surfing the other web (heh). And that’s just in the front of the house. Things get worse, much worse, as you move to the rear of El Casa Móvil De Pennington. Lately I’ve been involved in a daily ritual that involves wiping away webs that have been spun overnight in both the bathroom and the kitchen, and the spiders have become so numerous that they’re scurrying around in plain sight. It’s time for a new strategy: we’re gonna surge.
It appears that GHQ Arachnid is located in the bathroom. Yesterday I took extreme measures on the HQ… emptying both bathroom cabinets, thoroughly cleaning out the spaces, and finishing off by liberally spraying the interiors of both cabinets and the surrounding baseboards with Raid. Result: no webs in the bathroom this morning. The kitchen will be a little more problematic because I don’t want to engage in unrestricted chemical warfare in that operational area. The risk of collateral damage (to YrHmblScrb, hisownself) is just too high. So we’ll just content ourselves with applying forceful thumb pressure on the little terrorists as they transit from nook to cranny. And waging chemical warfare along the baseboards and other spaces in the kitchen where the risk of collateral damage is low.
We have evidence the surge is working, as noted above. There will be NO political settlement, and we’ll take no prisoners. All I’m asking is a return to the status quo ante, or in other words, if the spiders stay in their space, I’ll stay in mine.
Peace in our time. 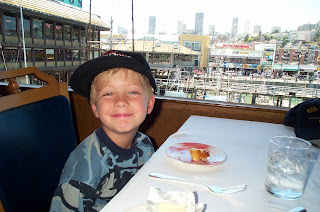 Today’s Pic: A rather cheeky-looking SN3 in a restaurant on ’s Fisherman’s Wharf. We were just finishing lunch and getting ready to go on a cruise around the Bay. And the following transpired as we were getting off the boat, after said Bay cruise:
Me: Well, what didja think?
SN3: It was kinda boring, Dad.
Me: (Dumbstruck silence, followed by a change of subject…)
June, 2002. (SN3 was five years old.)
Committed to the Inter-tubes by Buck on 7/29/2007 09:27:00 AM