So. I didn’t blog about it, there being some…no, a lot…of things in the news I won’t touch with the proverbial ten-foot pole. Dan Rather shooting off his mouth about CBS “tarting up” the news by hiring Katie Couric was one such item. There was a grain of truth in the story, however, aside from all the hyperventilating and illogical associations of the phrase “tarting up” and Katie’s own perky self. And that would be this:

From a high of 13 million viewers in her first weeks on the air, Couric is now drawing less than 6 million and the "CBS Evening News” is in last place in the nightly news race, according to the New York Post.
CBS reportedly plans an aggressive promotional campaign this summer in an attempt to boost ratings.
CBS really intends to get to the bottom of this, to an extent that was unknown until this past Tuesday, when IowaHawk blew the whistle. Here’s just part of the “inside story,” according to Ace Detective Dan Rather:
“It just doesn’t add up,” said Moonves, pacing the floor of his office and daubing the sweat from his glistening forehead. “The research boys Q-tested Katie with all the upscale demographic groups. We balanced all the war disaster stories with soft focus celebrity news. And still our numbers are leaking worse than a viewer in our core bladder control product advertising target.”
“Those viewers have to be somewhere, Moonves,” I said. “Maybe it was an inside job. Maybe it was the other nets.”
“No dice Rather,” he said, pouring another shaky four fingers of Ensure into his highball glass. “the audience embezzlers been hitting every precinct in town – ABC, NBC, CNN, MSNBC. They hit Time and Newsweek so hard that even the dentist offices won’t touch ‘em. If we don’t do something soon we’re gonna lose the Poligrip account!”
“Dan, do you think…do you think this has something to do with the internet mob?” said Couric, a pall of perky horror washing over her mug.
“I’m way ahead of you, baby. We’ve got some bloggers to talk to.”
She kicked me in the nuts again.
“Ow!” I screamed. “What was that for?”
“I thought you were going to slap me again,” she said.
I had to hand it to her. She was learning.
****************
“Where are we going Rather?” asked Couric, slinking into the passenger door of my black .
“Townhall. We’ve got a surprise date with Cleveland Huey and his crew.” I packed my Sony FV-100 noise canceller mic into its holster in case of trouble.
A few minutes later we arrived at the nondescript hall deep in the Blogosphere Bowery. We pushed through the filthy padded door and made our way to a smoky backroom. Huey was seated at a card table, around which sat a rogue’s gallery of sleazy online opinion slingers: Beantown Barney, the head of the Boston family; Mongo Steyn, the hulking French Canadian punditry thug; Duffer Hitchens, the East End goon with a taste for brutal polemics; and Jimmie Fargo, capo of the Twin Cities blog syndicate.
Jackpot, I thought. I knew they were up to their fedoras in some kind of audience heist. Trouble was, it would be next to impossible extracting information out of them. Hewitt and his gang were notoriously tight-lipped, and were blood-sworn to the Blogosphere code of silence. Getting two words out of this bunch of mutes would be harder than getting a proportional font out of a ’68 IBM Selectric.
“Nice little hideout you got here Huey,” I said sauntering up to the table. Couric’s fingers clutched my arm tightly. “There’s probably enough room here to stash a million or two missing TV news viewers.”
“You’ve got it all wrong, pally,” said Huey, tossing cards around the green felt. “This joint here is a, whattayacallit…”
“Social club,” offered Mongo, discarding a pair.
“Yeah yeah, social club. That’s it. Place for me and the boys to get away from the wives. Play some cards, talk about the weather. How’s the weather in these days, Jimmy?”
“The usual,” said , shooting me a straight razor glare.
“See what I mean, Rather? Strictly small talk.”
“Yeah yeah, boss, small talk,” said Beantown.
“Shaddup, stupid!” he glared. “Just play your hand, real easy-like.”
“That’s not the word on the street, Huey,” said Couric, angrily. “Word is you and your pals are packing microphones and rolling up a lot of hit counts.”
“Oh sure, doll, we do a little radio, and blog once in a while,” said Huey. “Just a little fun. But I ain’t touched a TV studio ever since I left PBS. Ain’t dat right, Hitchens?”
“I don’t know nuthin’ about nuthin’,” said the menacing Limey, slamming back a shot of Yoo Hoo chocolate beverage. “Gimme three.”
“If I were you, Rather, I’d go snoopin’ out in ,” said Hewitt. “That’s where all the action is. Any of you mugs got an 8?”
“Go fish!” snapped Gnat, Jimmy Fargo’s pint sized gun moll.
There’s a happy ending, of course. You can read the rest of “The Ratings Always Drop Twice” here. To quote Mr. Reynolds: Heh. 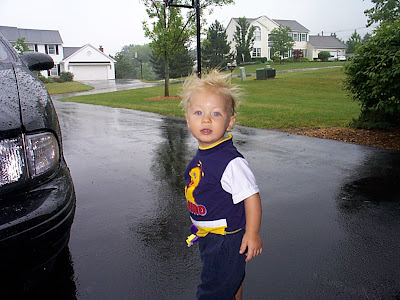 Today’s Pic: Crank up The Way-Back Machine and set the controls for the summer of 1998 (this being the first day of summer and all). This is SN3 getting ready to go out and stomp in a few puddles. Actually, he’s taking a short break as he had already been out doing just that, with active participation from both TSMP and me. Life’s small pleasures, and all that.
. .
Committed to the Inter-tubes by Buck on 6/21/2007 09:35:00 AM