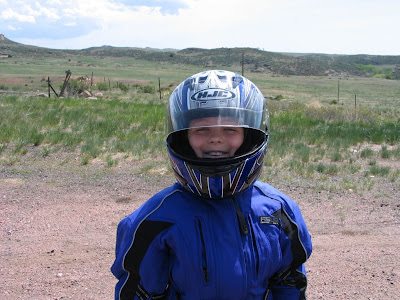 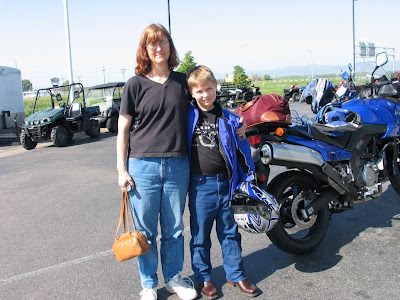 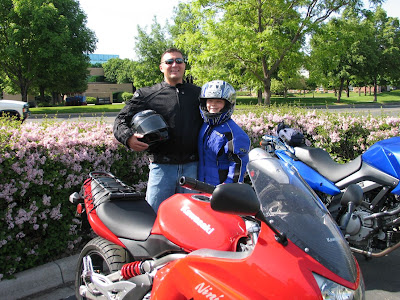 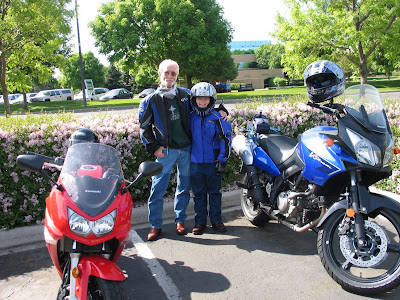 The second pic is The Second Mrs. Pennington and SN3, taken at a motorcycle shop in Fort Collins. We arranged to meet at the bike store on Friday morning in order to appropriately outfit SN3 for riding. TSMP did her part by buying SN3 a new pair of heavy duty boots and ensuring he had heavy pants…jeans, in this case…suitable for riding. My end of the bargain was getting Bobby a helmet, and I also bought him a motorcycle jacket since I wasn’t satisfied with the one TSMP brought along. Bobby was quite taken with his new helmet and pretty much insisted on wearing it all the time... so much so that it was hard to get a picture of him during our brief visit without the helmet.

The third and fourth pics were taken in the motel parking lot before we left on our ride out into the Colorado countryside on Sunday. The first parking lot pic is SN1 and SN3; the second is me and SN3. The first pic in this series is a head shot of SN3 taken during our ride.

Bobby is a good rider. He took my safety instructions to heart and behaved well on the bike. It turned out he enjoyed riding on Buck’s bike more than he did on the ‘Zuki, but that was because the passenger's portion of the seat on Buck’s bike is quite a bit narrower than mine and fit Bobby's smaller…uh…anatomy better than the wider seat on the ‘Zuki.

I’m not quite sure Bobby’s completely sold on the idea of motorcycling, but then again, he’s only experienced riding as a passenger, and not as the guy in control. There’s a big, big difference… I don’t particularly enjoy riding as a passenger, either... but Dang! do I ever love to "drive!"
Committed to the Inter-tubes by Buck on 5/23/2007 12:28:00 AM