Yesterday was quite the anomaly, weather-wise. And it was cold, too, what with a high of only 41 degrees. We got a lot of precipitation…in each and every form: snow, sleet, hail, and rain. I love the Weather Channel’s description of conditions when that happens: “wintry mix.” It was that, all right. And today? A high of 71 and bright sunshine…there’s not a cloud to be seen anywhere as I type. Oh, yeah, almost forgot: we had very heavy frost last evening.

Anxious about the mental cost of aging, older people are turning to games that rely on quick thinking to stimulate brain activity. A step slower than in their youth, they are using digital recreations of bowling, tennis and golf.

Spurred by the popularity of the Nintendo Wii game system among older players, Erickson Retirement Communities, based in , which manages 18 campuses around the country with 19,000 total residents, is installing the consoles at each location.

“A step slower…” Well, now… that’s being kind, isn’t it? Perhaps I can understand a video game version of bowling and/or tennis. But show me a golfer who will give up his game in favor of a simulation (barring illness or physical disability) and I’ll eat my hat. We all know a golfer or two and they just have to be among the most fanatical folks in the world when it comes to their sport. Yet again I digress.

SN1 has a Wii. He was going on the other evening while we were on the phone about how utterly cool Wii bowling is. I’ll take his word for it. Games based on motion sensors aside (I’ve not played any), I’ve never gotten in to video games at all. The simple reason: I suck at them. I dropped a pretty good chunk of change on various air combat PC games and controllers when the maid quit (there was all that time to fill), only to give it all away upon discovering I’d never progress beyond the first level, no matter what I did (or didn't do). I got SO frustrated over my inability to “get it” that I was afraid I was going to break something. Something expensive. So out they went, never to be replaced. I really don’t miss them, either. Guess I’m just not a trendy sort o’ guy.

Easy for YOU to say… A Double Standard for the Triply Wed:

But divorce experts say the stigma of serial marriages and divorces is on the wane. It is too early to tell how the idea of a thrice-married first lady may turn off conservative voters, but high divorce rates and longer life spans are making third marriages more common and socially acceptable, sociologists, family therapists and divorce lawyers say.

The article was prompted by the revelation that the current Mrs. Giuilani is on her third marriage. Personally I don’t give a big rat’s butt how many times other folks have been down the aisle, but as for me? I refuse…repeat: refuse…to be a three-time loser.

I know: never say “never.” But, in this case it’s a pretty safe bet.

While we’re on about affairs of the heart, this is amusing: It’s Not You, It’s Your Apartment. Seriously, it IS amusing.

Spring is here and the restaurants will soon be filled with anxious and hopeful couples, ordering wine, dusting off their most luminous lies, thinking they might finally have found love. Then they will see their dates’ homes for the first time. And suddenly some of them will realize that they cannot be with this person a moment longer — or at the very latest, because that wine was not cheap, beyond the next morning. A few whose homes have been romantic deal breakers may, like Mr. Podell, know what went wrong and choose to ignore it, seeing their apartments as a reflection of their brave refusal to bow to conventional taste.

“There have been at least 40 women who’ve said, why do you live here?” he says.

I can relate. Living in an RV is a romantic deal-breaker of magnificent proportions. That and not having a bed. But look at it this way: it’s an iron-clad insurance policy against becoming a three-time loser.

Ain’t that … “Too Busy to Notice You’re Too Busy.” Ah, a classic whine, this is:

In our busy, busy world, however, I sometimes feel as if I am the odd one out. Although those who are overworked and overwhelmed complain ceaselessly, it is often with an undertone of boastfulness; the hidden message is that I’m so busy because I’m so important.

Of course, it is not just in the work force that people are madly busy. Many people I know, who might be able to enjoy some downtime because their children are in school and they do not have paying jobs, pile errands on top of volunteering on top of working out on top of, well, you name it. When the children get out of school, they race from one activity to another, and if at some point life seems to calm down, then it is time to take on a big construction project, get a dog or have another baby.

Nancy Reagan’s exhortation comes to mind here: “Just say ‘No!’” Ah, but that’s oh-so-easily said, not-so-easily done. I have some experience here, in that I used to be among the terminally busy. Nowadays I’m much more like Randy Bachman, as he sang in that classic ol’ Bachman-Turner Overdrive song:

But I’m still a slave to e-mail. Some things just don’t change. 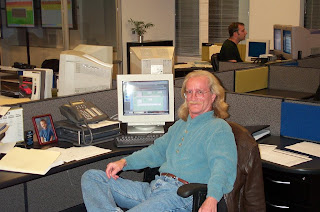 Today’s Pic: Me, back in the day when I was terminally busy. The pic was taken around 2000 hrs; note that it’s dark outside. And that’s the way life was: dark when I arrived, dark when I left. Terminally busy, in other words.