Minutes from this Morning's Staff Meeting

Decisions, decisions… Which do I watch tonight? State of the Union? Or the NHL Young-Stars Game? This is a rhetorical question, ya know. C-SPAN will re-run the SotU over and over and over; the Young-Stars game is a one-time good deal. No-brainer.

Speaking of the SotU… Jules Crittenden has written the speech Dubya should give tonight. Excerpt:

Don’t bother standing up or clapping, any of you. I already know who won the election, and I know how you feel.

I come before you tonight not to make amends, not to make it good, curry any favor or find any middle ground.

I am, more or less, a lame duck. You’ve had your 100 hours of party time. I know. I won’t get any legislation passed without some major bottom-kissing. Maybe something on illegal aliens. That health insurance thing I’ll be talking about later tonight is pretty much for show. I know it isn’t going anywhere. A proposal to raise middle-class taxes for a healthcare plan you don’t even want? What was I thinking?

None of that really matters. Not now. Those are peacetime issues we’ve been bickering about for a long time, and I don’t expect we’ll resolve them anytime soon.

So what is the best thing I can do tonight? I can tell you the truth. What none of you want to hear. What you’ve been stopping your ears to. The ugly truth.

The State of the is a disaster. I did my best, but I made mistakes, and my best wasn’t good enough.

Looks bad, eh? But, as it’s so often said, you need to read the whole thing.

We Know Where You Live Dept… Good Buddy Dan e-mails me last evening with the exact geo coordinates of El Casa Móvil De Pennington and asks “Is this where you are? I was just fooling around with Google Earth and took visual cues and narrative clues from your posts…” Uh, yeah. Exactly. I suppose I’ll need to be more careful about who I insult, and how badly I offend them, from now on, eh?

On the Other Hand: Nah. I’m armed.

On the Other, Other Hand: Dan, I believe you might have a future with NSA and/or CIA as an analyst…

Error Correction Dept…Watching Evening Edition last evening on The WX Channel and they’re doing a spot on snow in Las Cruses, NM. Would that be near , I wonder? (Full disclosure: they get the spelling right today.)

Who’d a Thunk It? Dept… A short little article in today’s WaPo about some surprising revelations in SecDef Robert Gates 1996 memoirs. I quote:

Of all the presidents he worked for, Defense Secretary Robert M. Gates is particularly supportive of one -- but it isn't, as might be expected, Ronald Reagan, the first President Bush or even Gerald R. Ford.

Rather, in his memoirs, the new Pentagon chief leaps repeatedly to the defense of Jimmy Carter, the sole Democrat for whom he worked, who was often seen as weak on the and taken by surprise when it invaded in December 1979.

Unconventional wisdom, indeed. Mr. Gates makes some good points, but… those good points aside, I still believe Jimmuh is going senile. His recent (and ongoing) comments and criticism of the current administration border on the criminal. Just sayin’. 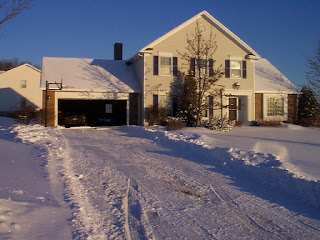 Today’s Pic: Apropos of nothing, aside from the WX Channel saying Ra-cha-cha is gonna get five or six inches of snow today, here’s a (grainy, first-generation digital) pic of The Ol’ Homestead in Perinton (a suburb of Rochester), NY. There’s about six or eight inches of that white stuff on the ground. January, 1999.