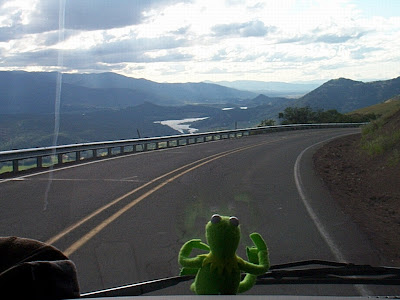 I noticed something unusual as I looked out my window yesterday afternoon around 1430 hrs or so. Southbound traffic on US 70 (towards : technically westbound, as US 70 is an east-west numbered highway even though it runs north-south in this neck of the woods) was stopped dead. Not moving, not even at a crawl. And there didn’t appear to be much, if any, northbound traffic. I assumed there must have been an accident, and it must have been one helluva accident, at that, because traffic still hadn’t moved an inch an hour and a half later. Further investigation reveals the following (from the Portales News-Tribune):

Travel throughout eastern slowed to a crawl Saturday as a major winter storm dropped snow across the region.

Numerous roads in Curry, DeBaca and counties were closed Friday and Saturday due to low visibility, drifting snow and accidents. The closures and treacherous road conditions jammed motels in Portales, and as the storm continued into Saturday night.

U.S. 70 west of Portales was closed mid-afternoon Saturday and U.S. 60 from to Vaughn was closed as well. Accidents and slick conditions Friday night forced the closure of N.M. 206 south of Portales as well as N.M. 268 north of and N.M. 209 from to Tucumcari.

State police and state highway officials were unsure Saturday afternoon when roads might be reopened.

US 70 appears to be open this morning…traffic is moving, albeit slowly, and the 18-wheelers are trailing huge billowing clouds of blowing ice/snow. The parking lot of the Holiday Inn Express across the highway is full-up, doubtlessly fall-out from the closure of US 70 yesterday. It appears to be a holiday windfall for P-Town’s businesses.

I’m glad I don’t have to go out today. As I’ve mentioned before: the Green Hornet just hates snow and ice.

So…I continued reading about Saddam’s hanging most of the day yesterday, and there was a lot to be read, if one was so inclined. Josh Trevino, writing a guest post at Townhall.com (Trevino: Tears for the Devil) noticed the same thing I did: the Loony-Left fringe just can’t stop ranting and raving. And whereas I simply linked to one such rant, Trevino provided numerous quotes from the leading Lefty blogs to substantiate the point. Here are three quotes Trevino found in various dKos diaries:

· [P]lease tell me what f------ moral standing does the (or any other country for that matter) have to go into another country and do what we just did to Saddam? The fact that it is the - that "shining beacon of freedom" is even worse. What does that say? What message does that send? And who made us World Police anyway? This is a mockery of justice.

· Why would I write an obituary for Saddam Hussein? Because he was a human being. He did some horrible things while he was alive, but he was still human. By murdering him we have become no better than he was.

· The administration will, in due course, stand to account for a war crime committed in by executing the Iraqi dictator.

Trevino provides many more such examples; these are just a taste of the madness. “Mockery of justice.” “War crime.” We’re “no better than he was.” Sheesh. Do those people really believe this crap? I mean…really? I just have to laugh whenever I hear one of these people describe themselves as members of “the reality-based community.” I’m tempted to rant about the self-evident dangers of consuming too many illegal drugs here, but that can’t be the sole reason. YrHmblScrb consumed his fair share of those same drugs in the way-back and it doesn’t seem to have affected his sense of reality. Or maybe they did. Depends on your point of view (and the amount of said drugs taken), I suppose.

On the other hand, Scott Ott made me chuckle with this bit:

(2006-12-30) — Reporter Bob Woodward said today he would soon allow his Washington Post editors to publish a secret interview he did in 2005 with former Iraqi President Saddam Hussein in which the dictator questioned U.S. President George Bush’s rationale for invading Iraq.

Mr. Woodward, who recently permitted his employer to publish a similar covert interview with the late former President Gerald Ford, said Mr. Hussein agreed to the no-holds-barred chat on the condition that the transcript be embargoed until after he “retired from public life,” which he did earlier today.

“I have always thought that President Bush did the right thing when he ordered the invasion,” Mr. Hussein told the star reporter. “However, I never understood why he made WMD such a big deal. Those canisters are so easy to hide and ship, and the lab just looks like any other lab after we scrub it.”

An alternate reality, to be sure, but one that’s a helluva lot more plausible than that on display in the diaries at dKos. 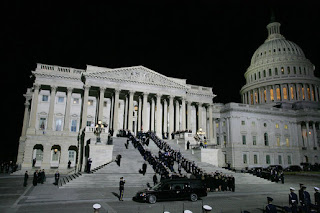 I took time out from yesterday’s Insignificant Bowls to watch President Ford’s state funeral in real time. And I was impressed. While the Brits have the pomp and circumstance thing pretty well nailed (no one does it better), we Americans aren’t exactly slouches in this department. The rituals were executed with solemnity and precision, the backdrops of the capitol were awe-inspiring, and the speeches were suitably impressive. Vice-President Cheney’s speech was particularly good. An excerpt:

Jerry Ford was always a striver -- never working an angle, just working. He was a believer in the saying that in life you make your own luck. That's how the Boy Scout became an Eagle Scout; and the football center, a college all-star; and the sailor in war, a lieutenant commander. That's how the student who waited tables and washed dishes earned a law degree, and how the young lawyer became a member of the United States Congress, class of 1948. The achievements added up all his life, yet he was known to boast only about one. I heard it once or twice myself -- he said he was never luckier than when he stepped out of Grace Episcopal Church in with a beautiful girl named Betty as his bride.

The whole speech is worth a read, and is one of the best speeches I’ve seen the Veep deliver.

Betty Ford was a model of strength and composure, like Nancy Reagan before her. Where these women obtain their strength in such sad times remains a mystery to me. And an inspiration.

About those Insignificant Bowls…there was quite a bit of good football on display yesterday. Navy lost a heartbreaker to Boston College in the final three seconds of the game, Texas came back to beat Iowa (most of which I missed because I watched the funeral, instead), and in (arguably) the best of the three games, unranked Georgia mounted a second-half comeback win over Virginia Tech that was one for the books. I hope the Significant Bowls turn out to be as good.

Today’s Pic: A view of a valley on State Route 66 between the towns of Keno and . Kermie always held his breath (as well he should have) whenever I took pics like this one. Something about two-lane mountain roads and paying sufficient attention to the task at hand… May, 2000.

If you're going out this evening: Party-Hardy, but please...Be Safe.