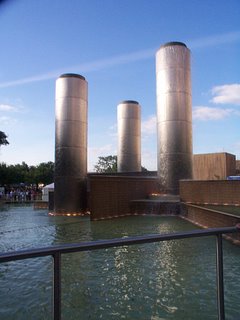 Black Friday. Both SN1 and SN2 were up at the crack of dawn and out seeking bargains this morning, if all went to plan. And I mean that quite literally: SN1 told me he and the family, which includes Mom this year, planned to be “in line” at 0500 this morning...all the better to get "Early Bird" goodies. I’m glad they’re doing their part to support the economy, because I’m certainly not. I have a built-in aversion to crowds, in the first place. And I hate to shop, in the second place. You might think “hate” is a pretty strong word, but let me assure you: it is not. If anything, the word understates my feelings about shopping. I go to the ‘net if there’s shopping to be done, and have done so since about…oh…1998. Thanks, AlGore.

Two or three times a month I’ll link to Mr. Lileks when he has something particularly funny to say, or an item that’s out of the ordinary in some way or another. While the Bleat is an everyday read for me, there’s more—much more—to his site. Lileks is a one-man kitsch conservatory. One man’s kitsch is another’s folk history, and in that spirit I give you the link to his motels site: a collection of vintage post cards found in Mom ‘n’ Pop motels during the 1950s and 1960s. These cards are pretty danged nostalgic for us geezers folks of a certain age, and interesting, perhaps, for the rest of y’all. I naturally scoped out all the entries; this is my favorite. Lord only knows how many of these places I’ve actually stayed in over the years. Hundreds. And not a few were on Route 66, before there was an I-40.

My current lust object: Susan Swain. Actually, Susan has had that status for a while now. (Along with my favorite Weather Babe, who apparently left The WX Channel. Or was fired. But I digress.) Susan is articulate, intelligent, and lovely as all get out, with a killer smile. And there’s an interesting twist here, too. If you clicked the link, you’ll see the article was published in “Connections,” a publication of the Association of Jesuit Colleges and Universities. Ms. Swain graduated from the in 1976. TSMP was also the recipient of a Jesuit education: ND, ‘78. She and Ms. Swain are about the same age and there’s more than a superficial resemblance, too. {Cue Twilight Zone music}

Today’s Pic: The cylindrical fountains in the aptly-named Tranquility Park, . The shimmering effect of water cascading down these 30-foot tall (or so) satin-finish metal cylinders is mesmerizing. I spent the better part of an hour here, just watching the water move. And the people, too. April, 2000. (As always, click for larger.)

Update, 1150 hrs: You need to get over to Laurie's place and view the video she posted this morning. Moving, to say the very least.