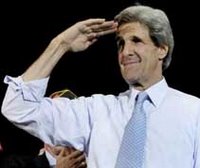 “You know, education, if you make the most of it, if you study hard and you do your homework, and you make an effort to be smart, uh, you, you can do well. If you don’t, you get stuck in .”

Still and even…a slip of the tongue is revealing, no? This from the man who fancies himself as Commander-in-Chief. Call it what you will, I say it’s contempt. Sorta like being in uniform and tossing “your” medals over the White House fence; that kind of contempt. Or not. Or maybe. Whatever. That sort of thing.

Folks with more on the subject: The American Thinker, Captain Ed, Michelle Malkin, Cassandra. The American Thinker’s post is brief and has a couple of good quotes and links on Liberal/elite thought on the military. When (not if, trust me) you go over to Cassandra’s place, scroll down and read her cheerleading for the Jarhead Valour IT team. Pretty funny stuff, that. She’s a great Team Leader!

If you are a satanist or pagan in prison in — you get Halloween off. The Daily Mail cites official documents saying devil worshipers and other devotees of the dark side will be excused from their work assignments tomorrow out of respect for their religious beliefs — and so the government won't be sued.

Pagans can choose two days off per year from eight of their festivals. Christians can have three days off — Christmas, Good Friday and Easter. Muslims get 26 days off — including all of Ramadan.

Interesting, eh? What struck me as odd, however, is the great disparity in days off granted to Muslims and those given to others. Just sayin’.

Pat Santy has a lengthy but interesting post up about the Democrats and the election. An excerpt:

The exception that the political left wants to make sure all of you retards out there are perfectly clear about is this: They want you to think that the only way the Republicans could keep their majority; the only way the Democrats would not "sweep" and take over in the 2006 midterm elections next week is...wait for it...if the Republicans cheated.

The first meme was simply annoying. The giddy self-congratulations; the constant reaffirmations by this and that poll, dutifully reported in the Democratic propaganda outlets at the Times and Post. The never-ending dissection of the public's obvious dissatisfaction with all things Bush and Republican.

The interesting thing about Dr. Santy’s blog is the perspective she brings to any issue, that being, of course, the perspective of the mental health professional. One of her recurring memes is the fact the far-left fringe is mentally ill. I believe it. Case in point: The moonbats are already making noises about election fraud, and it ain’t limited to one or two nutcases. The interesting thing is the moonbats aren’t waiting until after the election to claim fraud like they did in 2000 and 2004. Nope…they’ve learned at least one thing from Dubya: pre-emption. Dr. Santy has links…lotsa links! 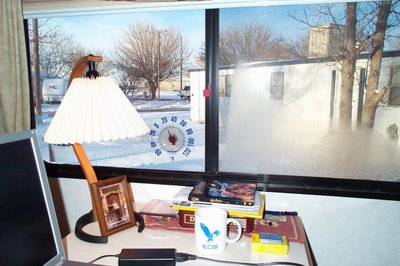 Flirting with the freeze…It was 34 degrees out when I woke up this morning, and the furnace has been kicking on and off all morning. It’s gonna get down to 32 this evening, supposedly. Ah, winter approaches. Or what passes for winter in these parts. Which, as you may know, is alright with me! Now, all that said, it does get cold here. Today’s Pic provides visible proof. Christmas Day, 2002.