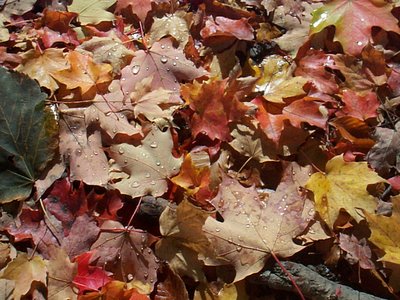 Yesterday was football, to the exclusion of everything else. It’s good to have a diversion, no? There were no big surprises or upsets yesterday (unless you count #20 Boston College losing to unranked NC State), but at least two Top 25 teams survived scares from unranked opponents. Most notably, #9 Georgia managed a 14-13 win over unranked Colorado, and as noted in last night’s post, #12 Notre Dame vanquished Michigan State in a mad fourth quarter. The Notre Dame game is the headline story on ESPN’s web site this morning.

None of that fodder mattered Saturday night.

In fact, all of it paled in comparison to the improbable, unbelievable (you-pick-the-adjective) game that unfolded in Spartan Stadium.

It was billed as the 40th anniversary of the 1966 "Game of the Century" -- a tie that eventually helped Notre Dame win the national championship -- but truth be told, the 2006 version deserves its own special one-of-a-kind billing.

The Fighting Irish, left for dead entering the final quarter, somehow erased a 16-point deficit and turned it into a 40-37 win that saved their season just before it went hurtling off the tracks and into the surrounding farmland.

I won’t say yesterday’s game was the best I’ve ever seen (this year’s Rose Bowl still is my pick for “best ever”), but it is definitely in the Top Five.

So. Back to business as usual. Speaking of “business as usual,” the NYT is busy disclosing more classified documents, this time cherry-picking quotes from a National Intelligence Estimate completed this past April. Actually, the article doesn’t contain quotes from the NIE. Rather, it contains quotes from “more than a dozen (anonymous) government officials and outside sources,” said sources speaking “only on condition of anonymity because they were discussing a classified intelligence document.” And the central point of the Times article? The lead paragraph:

A stark assessment of terrorism trends by American intelligence agencies has found that the American invasion and occupation of Iraq has helped spawn a new generation of Islamic radicalism and that the overall terrorist threat has grown since the Sept. 11 attacks.

The report “says that the war has made the overall terrorism problem worse,” said one American intelligence official.

I have no doubts the war provides great fodder for sermons delivered by radical imams when they’re not busy ranting about . But as for spawning a new generation of Islamic radicalism? I doubt it. The radicals were already radicalized long before the invasion of began. Has the war helped recruit more jihadis? Most likely yes. Are these new recruits a direct threat to the ? How can one know this, for sure? The Times seems to know, or at least it’s able to arrive at this conclusion when talking to unnamed “government officials.”

Well, ya gotta take the Times’ word on that, right? And given their track record of agenda-free, scrupulously fair reporting on the Iraq war and the President’s foreign policy in general, I guess we should believe what the Times says. In a pig’s eye. It’s just another hit piece that is impossible to verify.

This story is also a front page item in today’s WaPo.

Mark Steyn is on a roll today. His “UN show’s why it’s incapable of reform” in the Sunday Chicago Sun-Times is yet another of Steyn’s perceptive and witty commentaries. Excerpts:

's president was a huge hit at the U.N. Short of bringing out some burqa-clad Rockettes and doing a couple of choruses of "This Is the Dawning of the Age of a Scary Us," he couldn't have been a bigger smash. I said a year or two back, apropos the U.N., that it's a good basic axiom that if you take a quart of ice cream and blend it with a quart of dog poop the result will taste more like the latter than the former. And last week's performances at the General Assembly were a fine illustration of that. Ahmadinejad and Hugo Chavez were the star finalists of "UnAmerican Idol," and, just when you need Simon Cowell, the only Brit in sight was the oleaginous Mark Malloch Brown, Kofi Annan's deputy, fawning over every crazy in town. The rest of the bigwigs reacted like Paula Abdul, able to discern good points even in fellows who boast about not having any. That's the reality the Dershowitzes refuse to confront: that structurally the U.N. enables thugs to punch above their weight.

Chavez was an even bigger hit, in part because he eschewed the Holocaust denying, doesn't see himself as the warm-up act for the Twelfth Imam, and stuck closer to the American left's talking points: It's all the Bushitler's fault. He denounced Bush as an "imperialist, fascist, assassin, genocidal" and also "the devil," he held up a copy of some unreadable Noam Chomsky book, gave it a big plug and subsequently regretted that he couldn't meet with the late Professor Chomsky. Chomsky isn't late, he's alive and well. Granted, it's easy to get the impression he's been dead for 30 years, since he hasn't had a new idea since the early '70s.

Steyn agrees with Chavez on one key point, however: the UN should be relocated to . I’ll add my “me, too!” The sooner, the better. Without US funding.

Ever since Mr. Chávez held up a copy of a 301-page book by Noam Chomsky, the linguist and left-wing political commentator, during a speech at the United Nations on Wednesday, sales of the book have climbed best-seller lists at Amazon.com and BN.com, the online site for the book retailer Barnes & Noble, and booksellers around the country have noted a spike in sales.

The paperback edition of “Hegemony or Survival: America’s Quest for Global Dominance,” a detailed critique of American foreign policy that Mr. Chomsky published two years ago, hit No. 1 on Amazon’s best-seller list yesterday, and the hardcover edition, published in 2003, climbed as high as No. 6. At both Borders Group and Barnes & Noble, sales of the title jumped tenfold in the last two days.

Blatant self-promotion: Did I call it, or what? Here’s the type of person running out to buy the book:

Julia Versau, 50, a real estate writer in , said she saw Mr. Chávez holding up the book during a newscast on CNN. Although she had read Mr. Chomsky’s work on propaganda at least a decade ago, she said, Mr. Chávez’s speech reminded her to try the book.

“I saw the title and I went darn, I haven’t read that one,” Ms. Versau said in a telephone interview. “If he’s reading that I better go check it out.” She said that she had previously found Mr. Chomsky’s work “a little dense,” but said that “our democracy could use more people telling the truth and more people taking the time to read and get themselves educated.”

Alan Dershowitz, on the other hand, claims that most, if not all, of the current purchases will go unread:

“I don’t know anybody who’s ever read a Chomsky book,” said Mr. Dershowitz, who said he first met Mr. Chomsky in 1948 at a Hebrew-speaking Zionist camp in the where Mr. Dershowitz was a camper and Mr. Chomsky was a counselor.

“You buy them, you put them in your pockets, you put them out on your coffee table,” said Mr. Dershowitz, a longtime critic of Mr. Chomsky. The people who are buying “Hegemony” now, he added, “I promise you they are not going to get to the end of the book.”

So, is he dead, or not? According to CNN, , French, and Pakistani sources all agree: probably not. The general consensus is “wait and see.” The same sources all tend to agree OBL may be, and probably is, seriously ill from a water-borne disease, otherwise known as typhoid. Couldn’t happen to a nicer guy.

Today’s Pic: Yesterday was the first day of Autumn. So, in celebration, I offer you autumn leaves. Just in passing, I truly miss Fall colors, one of the virtues of living in a climate that has four distinct seasons. I sure as Hell do not miss the snow that follows, however.