Just the Usual and... an Aardvark! 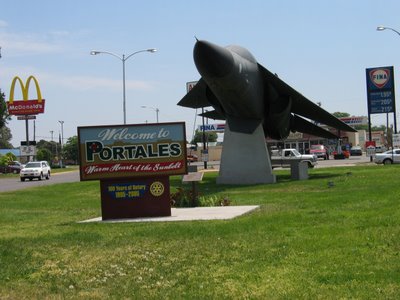 It’s August 22nd; Do you know where the Iranian nukes are? Lileks:

Okay, it’s later. It’s now in . Still a little too early to start the end of the world, but it depends whether you’re a morning person or not. Of course, if you’re hastening the chaos to bring the Messiah, you’d want to tidy up first. Fresh flowers.

I like whistling, personally. And gosh, this is a big graveyard.

I need to find some code for smilies, so in the meantime, {insert big ol’ grinning smiley-face here}.

And speaking of Iranian nukes… The mullahs have handed over a formal response to the UN’s ultimatum, nine days before the deadline. There are contradicting interpretations about the actual meaning of the response. Personally, I believe the answer we got yesterday is the definitive response:

"The Islamic Republic of Iran has made its own decision and in the nuclear case, God willing, with patience and power, will continue its path," Khamenei was quoted as saying by the broadcast.

Or, in other words, Khamenei is saying “Pound sand, Infidels!” Hmm. Not a bad idea. We pound sand pretty damned well, actually.

More Israel-Hezbollah fall-out… From The Telegraph ():

Hundreds of members of the Spearhead Brigade, a reserve unit that fought in south during the month-long conflict, signed a petition published in a newspaper that attacked the "cold feet" of their commanders.

"The war's aim, which was not defined clearly, was even changed in the course of the fighting. The indecisiveness manifested itself in inaction, in not carrying out operational plans, and in cancelling all the missions we were given during the fighting.

"This led to prolonged stays in hostile territory, without an operational purpose."

In scenes reminiscent of the first demonstrations that ultimately toppled 's leaders after blunders in the 1973 war, about 100 people, many of them reservists, marched in .

But, on the other hand, when invoking the ouster of the Israeli government following the 1973 war, one should consider this:

Only in retrospect can the 1973 war be satisfactorily analyzed. had been caught by surprise, because perfectly good Intelligence was misinterpreted in a climate of arrogant over-confidence. The frontal sectors, left almost unguarded, were largely overrun. The Egyptians had an excellent war plan and fought well. Syrian tanks advanced boldly and even where a lone Israeli brigade held out, they kept attacking in wave after wave for three days and nights. Within 48 hours, seemed on the verge of defeat on both fronts.

It is the same now, with the war just ended. Future historians will no doubt see things much more clearly, but some gross misperceptions are perfectly obvious even now.

Just being “fair and balanced,” ya know. Personally, I think Olmert and Co. should go. History may reveal parallels between the Hezbollah War and the 1973 War as well as lessons we’ve yet to learn. But for the moment I think it’s pretty clear that Olmert’s government botched it, and botched it badly. Your mileage may vary.

LONDON (Reuters) - Turner Broadcasting is scouring more than 1,500 classic Hanna-Barbera cartoons, including old favorites "Tom and Jerry," "The Flinstones" (sic) and "Scooby-Doo," to edit out scenes that glamorize smoking.

The review was triggered by a complaint to British media regulator Ofcom by one viewer who took offence to two episodes of "Tom and Jerry" shown on the Boomerang channel, part of Turner Broadcasting which itself belongs to Time Warner Inc.

"We are going through the entire catalog," Yinka Akindele, spokeswoman for Turner in said on Monday.

"This is a voluntary step we've taken in light of the changing times," she said, adding that the painstaking review had been prompted by the Ofcom complaint.

The regulator's latest news bulletin stated that a viewer, who was not identified, had complained about two smoking scenes on "Tom and Jerry," saying they "were not appropriate in a cartoon aimed at children."

The original (“classic”) “Tom and Jerry” cartoons aren’t Hanna-Barbera products…they’re MGM’s work. H-B later resurrected the characters. But, other than that, further comment not required. Because of my blood pressure.

Today’s Pic: What you see when entering P-Town from the south. The F-111 known as “The City of Portales.” F-111s, also known as “Aardvarks” due to their incredible beauty, were based at Cannon prior to their retirement from the inventory. SN1 knows all about Aardvarks…