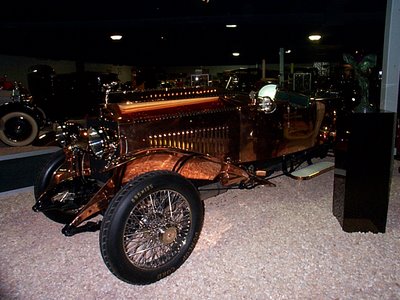 My bizarre sleeping habits have returned…Slept waaay late, and was up and drinking my first cup only minutes before 1100. Talk about late starts! So, here’s a pic and a quick read for ya until I really get going. Gomen.

ANOTHER Israeli atrocity! Via Iowahawk:

According to Reuters spokesman Martin Aldwyn, the vehicle was used by the agency's local freelancers to transport poignant war-ravaged street urchins to Lebanese hospitals. Although clearly marked with a red cross, "PRESS," fuzzy dice, and the international symbol for "Baby On Board," the flaming 1950 Mercury was left nearly unrecognizable by the attack. Photos show that the impact of the Israeli missiles slammed the vehicle to the ground, lowered its roof five inches, and left it with a pancaked hood, shaved door handles, frenched headlights and grille.

Ya gotta be into Hot Rods and the associated terminology to really appreciate this… Most Americans understand it, I think!

Today’s Pic: Speaking of cars… Pictured is a copper-bodied Rolls Royce displayed at The National Auto Museum in . The copper is so highly polished it’s mirror-like. Most impressive, as is the museum itself. I’ve never been to a better automobile museum.