Not Your Father's Air Force and Other Stuff

I’m posting kinda late today, for some of the usual reasons. First, and foremost: I slept in. No matter how hot it gets during the day here on the High Plains, it’s always cool at night. I opened up all the windows in El Casa Móvil De Pennington sometime after midnight last evening when the temp dropped down to 70 or so. Our overnight low was 60, so upon the first awakening this morning I rolled over, pulled the light blanket up around my ears, and caught another 40 winks. Perfect sleeping weather, it was. I’ve written about this phenomenon before; it’s still true and will be ever so.

Secondly, I took my morning coffee on the verandah, so to speak. By the time I rolled out and the coffee was done the temp had reached 80 degrees or so. So I parked my old butt in my comfortable camp chair outside El Casa Móvil and reveled in the gentle High Plains zephyrs and balmy temps. What a wonderful start for the day! I came inside when it hit 86 (I checked the WX Channel for that) and began my morning reading…several hours later than usual.
Yesterday I noted the Air Force Association sent me a “heads-up” about the VA privacy issue. Well, later in the day I received a routine e-gram from AFA with various newsy notes. Here’s one that caught my eye:
New Service Dress Prototypes Pique Interest
Based on feedback received during visits with Airmen across the Air Force, the Air Force Uniform Board is reviewing several concepts that Airmen have suggested regarding the appearance of the service dress uniform. Some of the informal feedback about the current service dress includes Airmen wanting to revamp the service dress to look more military, like the other services. Click here for story.
“More military,” indeed. Like this? 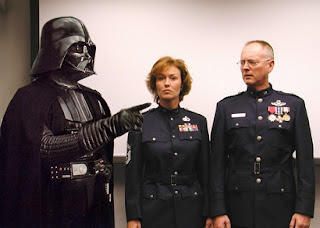 As Lileks would say: Jeebus Crow! OK… the Billy Mitchell look is definitely more military, but the “Back to the Future” aspect of these uniforms simply rubs me the wrong way. I can’t imagine going out to the base and seeing folks walking around looking as if they’ve stepped out of a 1929 Howard Hughes aviation epic. Boggles the mind it does. And it’s part of a disturbing trend. A couple of years ago USAF’s senior leadership decided the old (unofficial) Hap Arnold logo was passé. I ask you, just what is wrong with this? 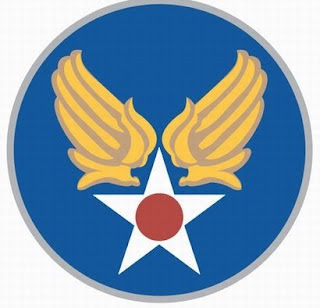 Especially compared to this abomination: 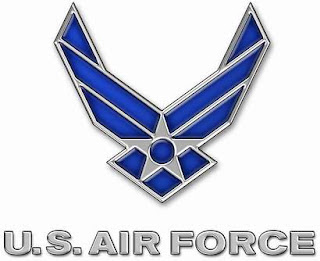 The new logo was “sold” using this logic:
As the Air Force continues its transition to an expeditionary aerospace force, it is focusing its identity to help with recruiting and retention in the new millennium. As part of this effort, officials are establishing a single, compelling theme and symbol to represent the Air Force to its members and the public. The proposed symbol updates the Hap Arnold wings and star with a more modern, angular design.
Have you ever read anything more “corporate” than that blurb? Forego well over 60 years of proud tradition for “a more modern, angular design.” (Squids, Ground Pounders, and Jarheads: don’t laugh. Yeah, you have a couple of hundred years on us, but our traditions, short as they are, are still traditions.)Yeah, right. I shook my head in disgust when I heard about that one. And then there was last year’s new, improved Mission Statement. I loved that one, too. As you can tell.
{sigh}
I don’t like what’s happening to my Air Force. But then again, “plus ça change…” I remember my father saying the exact same things to me, early and often. I’m sure Son Number One feels the same.
Well, now that we’ve gotten the Old Fart rant out of the way… Lileks is pretty good today, as usual. I’m not the first, nor will I be the last, to say one of the best reasons to read Lileks are his parenting tales. He closed today’s post with this:
“I’m going to be an adult in the future,” Gnat said from the back seat, apropos of nothing, “because I was born in the past.”
“I’m in the future now,” I said.
“What?”
“When I was a kid, today was my future.”
She thought about that for a while, then smiled, and honest to God, she laughed and said:
“You thought you were going to have flying cars!”
I almost drove off the road.
“What?”
“Oh nothing. That’s just a thing in the future on shows, cars in the skies. But it’s really not real.”
True, but you can get close. I rolled down the windows and punched the button on the steering wheel to change to the techno station. YEAH! she said from the back. The light turned green; I punched it. Daughter and dad on a spring afternoon, laughing and bobbing our heads to the music, wind in our hair. Flying.
I read that rather wistfully, thinking of things that might have been. Life can be cruel at times.
Hockey, briefly. Great game last night. “Great” is an understatement. was down 1-0 going into the third period; the final score was 5, 4. To say the action was fast and furious in the third period is classic understatement. And the game got off to a flying start…a fist-flying start.
The game was filled with penalties and was particularly ugly early. There were three fights in the first five-and-half minutes. The two teams combined for 16 penalties for 44 minutes in the box in the first period.
“Ugly” is subjective. You had to be there, of course, either in the arena or via TV. What was left out of the blurb above is the fact that there were three individual fights and one big-ass brawl involving everyone but the goalies. Hockey fans understand what’s up with that. I won’t go further; you either get it or you don’t. Anyway…the Ducks are in a big, big hole. The Western Finals just might be over tomorrow night.
No politics today. I haven’t even looked at the news, let alone thought about it enough to put my scribblings on the record. For what that’s worth…
Update, 5/24/2006, 1218 hours: Forgot the hat tip on the Darth Vader photo: courtesy of Son Number One. I also forgot to mention General Hayden's nomination was endorsed by the Senate Intelligence Committee, 12-3. Dissenters? The usual suspects: Feingold, Wyden, and Bayh. And that's yesterday's news, by the way. Gen. Hayden is expected to be confirmed by the full Senate before Friday...which is Porter Goss' last day as DCI.