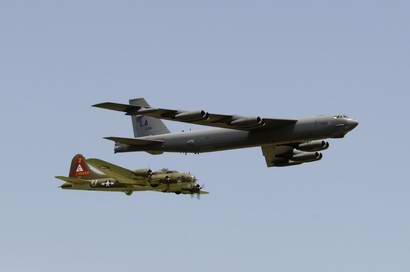 USAF Photo
My new wall paper, from af.mil’s “Week in Photos,” hat tip to Murdoc. The full effect is only realized by seeing the original, high-res pic, photo number eight at the WiP link. Three words come to mind when looking at this photo: “Sound and Fury.” One can only imagine how breathtakingly loud it must have been in the cockpit of that B-17, what with the syncopated racket of those four big-ass Pratt &Whitneys, coupled with the scream of the B-52’s eight jet engines. B-52s are LOUD! So are B-17s, for that matter, but it’s a different, anachronistic, kind of “loud.” Apropos of nothing: My father flew in B-17s in Big Bang II. Also at af.mil’s “Week in Photos,” a cool pic of the Thunderbirds celebrating their 4,000th show, performed on .
A brief follow-up to yesterday’s rant…the WSJ has a piece on the same subject, and you can read the speech John McCain gave at The New School here. The speech is quite good, and the content is rather ironic, given the Moonbat epistle that preceded Senator McCain. The title of Senator McCain’s speech? “Let Us Argue.” Indeed.
Those of you who read the comments to yesterday’s post know some anonymous moonbat posted a link to truthout.org’s May 13th story that Karl Rove has been indicted. (Note: post a comment anonymously and I’ll call you a moonbat. Use your name and I’ll be more respectful. Just sayin’.) You also know I posted a link to truthout’s “partial apology.” Well, there’s a lot of chatter on this subject in the ‘sphere today, including a WaPo article about Rove’s attorney being highly irritated over the original May 13th indictment claim. The Commissar has a good round-up of the brouhaha. This is interesting only because of the dramatic juxtaposition in claims. Someone is horribly, terribly wrong here. It remains to be seen who…
Fifth Column: the Council on Arab-American Relations (CAIR). Frontpage Magazine has a detailed essay on this organization that ostensibly exists to improve dialog between Americans and Muslims. Bullhockey.
Hockey. Whoo-Boy, the Oilers definitely are for real. They took last night’s game in and go back to with a 2-0 lead in the best-of-seven Western Conference Finals. While I’m not ready to count the Ducks out, they certainly have their work cut out. And it’s not encouraging, if you’re a Ducks fan, that has lost 14 games in a row to . That’s some serious history to overcome. The Ducks – Oilers series has come down to a battle of the goaltenders. goalie Ilya Bryzgalov, who had that incredible shut-out run of 229 minutes, 42 seconds earlier in the playoffs, hasn’t played badly at all. But Dwayne Roloson has played better, and there’s the story. The Ducks outshot , 34-25, but Roloson was a frickin’ wall. If is going to do anything in this series, they have to solve Roloson. couldn’t do it, and neither could …both of those teams have very high-powered offenses. I don’t give much of a shot (pun intended), unless Roloson undergoes a major collapse. Fat chance. Tonight it’s Game Two in the – series…
Hot Hot Hot! P-Town’s heat wave continues. We’ll be in the mid-to-high 90s all week. Yesterday we were supposed to hit 99 degrees, but a mid-afternoon thunderstorm took us from 95 down to 85 in a matter of minutes, while also knocking me off the air for six hours. Which, while we’re at it, explains my “late” post yesterday evening.
Committed to the Inter-tubes by Buck on 5/22/2006 01:19:00 PM