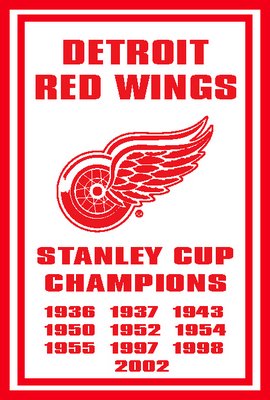 Let’s hope we add another date to that banner in the photo come June. The regular season is almost over (the Wings have two games left: tonight and tomorrow), and although the league hasn’t announced the play-off schedule as yet, most folks think the play-offs will begin this coming Saturday. To say that the Wings have been playing well would be a gross understatement…they’ve won 12 in a row on the road, setting an NHL record for regular season road wins in the process, have sown up the President’s Trophy with 122 points and two games left, and have just been playing superb hockey. Yzerman is playing like a man ten years his junior, Shanahan has 40 goals, Lidstrom looks like a lock for the Norris trophy, and the younger guys have stepped up. But. The play-offs are different, to state the obvious. Although the Wings have pretty much led the league from start to finish this year, I’m somewhat reminded on the ’95-’96 season. The Wings accumulated 131 points and the President’s Trophy that season, but were eliminated in the Conference Finals by the hated Avalanche. From the Red Wings official site:
But it was playoff disappointment once again for as it was eliminated in the Western Conference Finals by the Colorado Avalanche, who would go on to win the 1996 Stanley Cup. That series began the fierce rivalry between the Red Wings and the Avalanche. The most significant incident came in Game 6 when Claude Lemieux drilled the Wings' Kris Draper into the boards from behind and left Draper suffering serious facial injuries as a result.

Shanahan was one of the final pieces in 's Stanley Cup puzzle and went on to score 46 goals that season. Veteran defensemen Larry Murphy was acquired at the trade deadline and Kocur, who had been traded to the New York Rangers in 1991, returned to as a free agent in December 1996. But the regular seasons most memorable Red Wing moment came on when McCarty exacted revenge on Lemieux for the hit on Draper. It came during an on-ice brawl, which featured goaltender, Patrick Roy and Mike Vernon in a slugfest at center ice. The frenzy helped rally the Wings from a two-goal deficit to a 6-5 overtime victory as McCarty got the winner. When went on to win the Stanley Cup, each player pointed to that game as the moment they became a team. (ed: emphasis mine)
I watched that March 26th game in ’97, and what a birthday present it was! I may have seen better games, in terms of skill, tension, and hockey expertise, but I’ve never seen a game that was as exciting or as emotionally rewarding. Well, check that. The fourth game of the ’97 Stanley Cup finals, when swept the Flyers to end a 42 year Stanley Cup drought, was exciting as all Hell. It got waaaay drunk out that night!
Yep, the Wings look good this year and seem set to make a run all the way to the Cup. I can’t wait for Saturday!
Committed to the Inter-tubes by Buck on 4/17/2006 11:50:00 AM