Weird Scenes Inside the Gold Mine, IV

End of the Night

Some are born to the endless night

It’s late, just past 1:00 a.m. I just dropped the girlfriend off at her house, now I have to get to work. My shift began at midnight, but it’s OK. I greased it with the guy I’m relieving last night; told him I had a date and would be an hour or so late. Close enough. But first I have to do a little favor for a friend. My best friend Pete, a sky cop who works the same shift rotation I do, asked me to drive by his apartment to see if there was “anything strange goin’ on” before I head up the hill. So, I drive by Pete’s place, and sure enough, there is something strange. All the lights are off in Pete’s apartment, but there’s a car parked outside, and it ain’t Pete’s.

Just as he suspected.

“Loan me your car and watch the gate for me for an hour.”

"Asking a lot" is a classic understatement. Pete is going to desert his post and I’m going to be a freaking accomplice. If we’re discovered the best that would happen would be a real ass-chewing and extra duty. Worst case, we could be court-martialed. I’m thinking worst case.

“C’mon. I really need to sort this out.”

I realize he’s really hurting and there’s absolutely no doubt in my mind he’d do the same for me if I asked.

“Let me go relieve Bob and I’ll be right back.”

I drive up the top of the hill to the radar tower, park the car and go in. Shift turnover takes less than five minutes, and that includes Bob’s mandatory debrief on my date. Nothing’s going on (Thank God), all the systems are up, and there’s nothing unusual scheduled for the rest of the night. Bob walks out the door, I hear his car start up and he leaves.

I take about five minutes to step through my routine shift checks and then go out, get in my car and whip down to Ops. I go in, make my presence known, exchange small talk with the Ops shift supervisor and then get back into my car and drive down to the gate.

Most of the guys in Ops were already asleep, and the shift supervisor gave every indication he was gonna get that way as soon as I walked out the door. Such is life on weekend mid-shifts.

Pete’s pacing up and down outside the gate when I get there. I get out of the car and Pete says “Damn! That took long enough!” I smile and toss him my keys. He’s in the car and gone before I can say “Be careful!”

I swing the gate closed and watch the headlights of my car disappear down the hill. I watch until the car is out of sight and then go into the gate shack, pour a cup of coffee and fiddle with the radio. It’s about a ten minute drive from the site in to town, so an hour is more than enough for Pete to get to his place, kick our friend out, confront his girlfriend, do what he has to do (whatever that may be), and get back. It’s not quite 2:00 a.m. so I figure I’ll see Pete somewhere around 3:00.

And then it hits me. Pete didn’t leave his gun. He’s armed, pissed off, and he’s on his way to roust some poor SOB out of HIS bed. Goddamn! I tell myself Pete’s level-headed and won’t do hard time for that wench. I try and relax. It’s no use. Why didn’t I think about the freaking gun?

I’m pretty damned frantic by now. My imagination is running wild. Double-murder. Suicide. Worse. I’m wondering what Leavenworth is really like, sure in the knowledge that I’m gonna find out, up close, personal, and real soon. I can’t call Pete’s house, there’s no direct dial off the site. I’d have to dial zero, from the freaking gate shack, fer God’s Sake, and ask the Comm Center operator to put me through. That’s a serious no-go, a dead give away something’s not right. Besides, the freaking operators listen in on phone calls. So, I stew. And sweat. A lot.

Half an hour later the sky is rosy pink…dawn is nearly here. At 5:45 I see lights in the canyon. I go outside and watch the lights crawling up the hill, praying it’s Pete and not some other guy, or God Forbid, an officer. Two or three minutes later I can hear the car. It’s mine. Thank God!

The gate is wide open by the time Pete gets to the top of the hill and he roars in and cuts the motor. I scream ALL the curse words I know at him before he’s even out of the car, and probably made up a few new ones right on the spot.

“Coffee fresh?” he says. I could freaking KILL him, and all he can say is “coffee fresh?”

He grins and says something like “Be cool, everything’s OK,” and we go in the gate shack. He sits, I stand, and he fills me in. He never drew the gun, but told me our friend saw it in his holster right off the bat. The boy was scared shitless, and I don’t blame him for being scared. He should have been damned scared! Pete didn’t even smack him around, although he admitted he wanted to. Pete said he threw him out the door in his underwear, clutching his clothes. We laugh. Pete tells me about the ensuing conversation with the girlfriend. I try and be as empathetic as I can, considering I'm still six different kinds of pissed.

I told Pete I thought he really abused me, told him how freaking worried I was, and on, and on. Pete apologizes. I go out, get in the car and drive on up to the search tower to complete the night's work and fire up the coffee for the day shift.

Eventually I would forgive Pete. But not that night. Not even that week.

One week later and Pete moves out. The girlfriend is never going to change, and Pete is smart enough to realize that. And better off for it, too.

As for me, I never, ever, did a “favor” like that again. For anyone, in or out of the service. One Endless Night is enough for a lifetime. 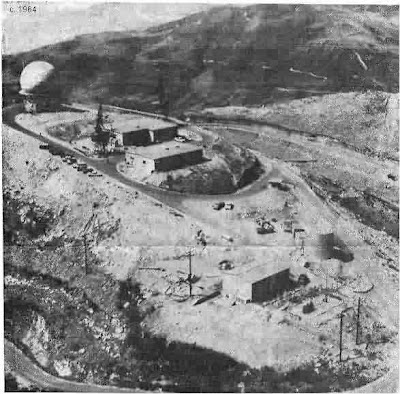